-This post in particular relates to the fact grocery stores are often chosen based on their assortment of goods that they have in store. I plan on using this study to note the fact that Farmers Markets often have much less variety than in grocery stores purely based on resources and space. Grocery stores have large open spaces with bright lights and have the resources to make their products look as attractive as possible, in addition to having many workers in the store. Farmers Markets often rely on the farmers themselves and whoever they bring(if anyone) to assist them. Farmers each bring their own assortment of products but this cannot often compete with the thousands of products that grocery stores offer.

-This case study dives into specific farmers markets throughout the U.S. and breaks them down  to describe their physical characteristics and properties. The study uses pictures and a series of charts to describe the physical layout of various markets and how these layouts are intentionally designed. This piece also describes the fact that Farmer’s markets are places for people and are more interactive spaces than grocery stores.

Professor Vooris was extremely informative especially in a subject that I personally do not have much experience in. I have known how political food could be but the DTWOF had an extremely unique take on the politics of food especially with a feminist lens. Something completely new to me that Professor Vooris introduced was the sexuality and heteronormativity of numerous stock photos on the internet that I have never thought about before. These stock photos may not seem very important but if they are being used by the millions all over the internet, they can completely shape a conversation around heteronormativity as well as the sexualizing of women specifically as it relates to food. This past week I visited Russell Jones at the Celtic Knot Alpaca farm which is right down the road about 10 minutes from campus. Russ runs the farm with his sister Rebecca Jones and they have a pack of 40 alpacas with 1 Llama, for protection. Russ primarily runs the day to day operations on the farm. All of the animals are raised for their wool only. Russ was mainly discussing the business aspects of his operation such as how he processes the wool as well as the co-ops that Celtic Knot are a part of in order to maintain as close to profitiability as possible.

Russ seemed particularly prideful about the fact that the Jones family produces their final product from start to finish and it is all hand-made, however this makes the products slightly more expensive than imported products which Russ mentioned was one of the difficulties of running the business-side of the farm. However I was thought it was particularly unique that for every animal that is on the farm, there is carefully documented genetic information to prove that all of the animals were raised by Russ, and to the genetics of their color.

One of the most major obstacles that the farm faces is the zoning of the piece of land that the family owns. Russ would like to expand his fenced in pastures, yet there is a marsh that flows into a creek that divides part of the property. Russ continued to explain that this particular creek is under a reforestation program through the State, therefore it limits what he can do to his own land. However, the land nearest to this creek turns out to be shale which he commented makes it nearly impossible to plant anything. This creek also requires Russ to have a bridge on his property to transport the herd to different pastures as well as a bridge strong enough to hold a tractor. These are some of the main issues Russ faces when planning for the future especially increasing the size of the herd to increase profitability.

Lastly, Russ discussed at length the fact that Alpacas and Llamas are very low maintenance animals to farm which makes them so popular especially in this area for farming enthusiasts. The animals are relatively low cost, relatively healthy, and even quiet (unless a predator is present). I was previously unaware that in the surrounding counties, there are probably 20-30 alpaca herds, Russ’s being the largest. Considering this fact, it allows Russ to make extra business by shearing for other farms and even purchasing wholesale fibers that small herd owners cannot really use because of the small amount. Russ uses the wholesale fibers to blend in with his own, (if the fibers are similar enough) to make the threshold weight at a mechanized processor.

I did not know much about Alpacas before this but Russ was beyond welcoming, informative, and knowledgeable. Celtic Knot Farms seems to run a tight-ship and all of the animals themselves were friendly and clean. Russ also has various cats roaming the farm that have helped socialize the Alpacas along with a big dog that lives with the males. The Llama in the pack of females (Sadie)  is for protection, hence her large size, from predators such as coyotes. The dog with the males usually acts as protection, but Russ said that the males are typically aggressive towards natural predators and thus he worries about them less.

I have identified my interviewee as Joe Amsterdam of Sweet Pea Farms in Shermans Dale, PA. I am still waiting for a response from Joe but if no response continues, I plan on driving there and popping in because apparently Joe enjoys when interested potential customers drop in. Sweet Pea Farms is a small 45 acre farm that raises lambs, laying hens, pork, and meat chickens. They raise their animals on free range pasture, and free of GMOs and antibiotics. Sweet Pea Farms operates at Farmers on the Square which is how I have heard of them.

I plan on the theme of the interview focusing on why him and his wife decided to go into farming as well as any difficulties they have had on such a small farm. I plan on asking the following questions:

Assignment #1: You and the Food System – Adam Fine Eggs: The eggs that I consume on a daily basis are usually chicken eggs that are prepared fried or in an omelet form. Considering I get my eggs from the school cafeteria, I am not necessarily sure where the eggs come from, but I would hope they are not coming from more than 100 miles away.  Hens are often kept in a very controlled environment and fed a mix of feed made of corn, soybeans, and vitamins. Most eggs are now collected with automated machines now rather than by hand. The eggs are then washed before they are graded when workers essentially look inside the egg to view the quality.  After grading, eggs are eventually packaged most often in groups of dozens by size and color and shipped in refrigerated trucks to distributors. Eggs are typically produced in areas that have enough open space to house hundreds of thousands of chickens. Chicken farming both of meat and for eggs has been almost taken over by a few major companies that have put most chicken farmers under the thumb of these major companies, such as those mentioned in Food Inc. Considering I do not know where the schools eggs come from, I would hope that there travel distance is not far but I have no way of knowing. 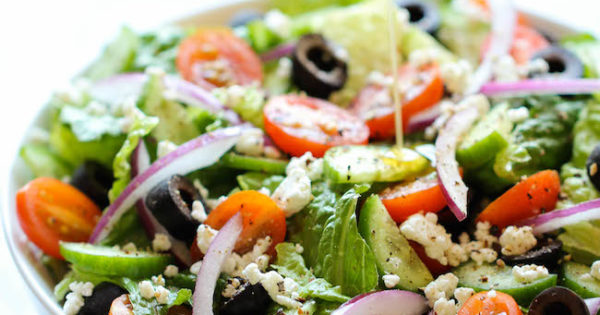 Salad: On the average day, I will likely have at least two salads of various types. Sometimes I make a smaller side salad and other times the salad itself is the overall meal. My typical salads usually include items that the school offers but such ingredients as: romaine lettuce, spinach, sliced tomatoes, quinoa, cucumbers, cranberries, and usually some sort of crumbled cheese such as feta. Dickinson attempts to use as many vegetables as possible that the college farm produces or to buy from local producers considering Carlisle is located in a particularly rural area where there is plenty of open space to farm. In the United States, states such as California and Arizona produce the most romaine lettuce and spinach considering the environments that the geographic areas have are conducive to growing and agriculture scientists have figured out how to manipulate the  crop to grow in a chosen area, rather than the land in some cases. Cheap labor is often used in the production and collection of lettuce and spinach and the large corporations that own these farms often use undocumented immigrants to get away with paying their workers as little as possible. Considering many of the workers are undocumented, there are also numerous issues with employee safety and treatment that the farming industry has been guilty of especially in the U.S. Realistically, the lettuce and spinach that I consume is either coming from less than 50 miles away (local) or thousands of miles away on the opposite coast.

Potatoes: I consume potatoes in various forms every day whether it is in French fries, roasted potatoes, or a few various other forms.  Potatoes can be produced in various temperate climates which makes it a cash crop. Potatoes are a root vegetable, meaning that they grow below ground in the dirt, which can protect them from airborne diseases or pests, yet means they must be washed even more thoroughly. They can be grown in relatively loose soil that provides good aeration and drainage for the plants. Potatoes are very resilient plants themselves because they are adaptable which means that they can often grow even without optimum conditions such as soil quality. The average food miles for potatoes in the U.S. is approximately 940 miles which is a considerable distance, yet not as bad when you remember that potatoes store very easily.

I am an Economics major and also fulfilling the Food Studies Certificate. I am really excited for this class and I’m particularly interested in how processed foods have affected modern society.