The Rosenbergs: Treasonous Spies or Otherwise? 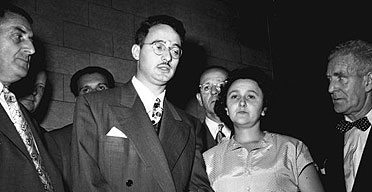 I was not familiar with the case of Julius and Ethel Rosenberg before we watched the documentary film made by their son Robert as a class last week. Julius and Ethel Rosenberg were tried and convicted as spies for Soviet Russia during World War I. On June 19, 1953 the couple was executed, leaving behind two sons. The Rosenbergs were accused of treason by David Greenglass, Ethel’s brother. Greenglass himself had been a member of the communist party and a spy for the Russians. In order to save himself (and his wife) from jail time, he fabricated a story for government officials that accused Ethel and Julius of giving the USSR information.  After the movie, I couldn’t help but feel that a great injustice had been performed by the United States government. I do not claim to be an expert on the case, but while doing some of my own research after viewing the documentary, I could not seem to find any solid evidence that the Rosenbergs had committed a crime grievous enough that they should be executed. One interesting source of information that I found was the site created for the Rosenberg Fund for Children created by Robert Meeropol. The site contains links to all the documents related to the Rosenberg’s case:

There is no question that the Rosenbergs were very active members of the Communist Party. Their involvement in the Communist Party was shown in the documentary as well; however the Communist movement was made up of thousands of young Americans who sought to change their country for the better. Some argue that treason is treason and despite the fact that the Rosenbergs told the Russians information during a time of alliance between the USSR and the US, what the Rosenbergs did was wrong. The problem that I find with this accusation is that even the Vernona document (the main evidence used against the Rosenbergs in their trial) only mentions Julius a couple of times, and names Ethel only once. The Rosenbergs were peripheral spies, if anything; they were not main contacts.  Most historians now even suggest that Ethel was not involved at all, since in the Vernona document does not give her a codename, but rather uses her real name.

Whether or not you believe that the outcome of the case was just, the case is arguably one of the saddest stories in American history. I believe that no matter which way you frame the case, execution of two American citizens on less than certain evidence is nothing less than a crime. I found the documentary to be very touching and I’m glad we watched it.

Picture of Julius and Ethel from: http://www.guardian.co.uk/books/2008/mar/15/featuresreviews.guardianreview30

Picture of Robert and Michael from: http://www.topyaps.com/tag/the-rosenbergs/