Heir to an Execution: feeling out the shades of gray

The Rosenberg case remains one of the most famous cases in the United States of alleged espionage and possible government conspiracy during the Red Scare.

In her documentary Heir to an Execution, Ivy Meeropol, granddaughter of Julius and Ethel Rosenberg, embarks on a quest to learn more about her grandparents, why they were executed, and the web of people involved. Through a number of interviews with family members and colleagues of her grandparents, Ivy seems to seek understanding as well as peace with what’s happened.

In an interview about the documentary, Ivy asserts that “history is made by human beings…and the gray area is the most interesting and probably most important to look at.” This quote explains her insistence in learning more about her grandparents’ execution and bringing more dimensions to the story, such as social and political context and the human side. “I hope that people look to learn at history in a way that is not so black and white.”

Central to the film is the question, “What was worth standing up for to die and leave the family behind?” Ivy struggles to make sense of her grandparents’ reasoning to both go down together rather than confess or have one testify against the other in order to leave someone behind to take care of the children, Ivy’s father Michael and her uncle Robert Meeropol. The sensitive nature of this question, as well as Ivy and her family’s personal connection to the Rosenbergs’ execution has a potent humanizing effect.

The humanity is felt in emotionally charged scenes like Ivy’s visit to David Greenglass’ house, Ethel’s brother, responsible for implicating Ethel with his testimony and the trip with her father and uncle to their old apartment where Julius was arrested. Additionally, from the beginning, the film demystifies communism and explains its appeal in offering a better life. Communism wasn’t just a dangerous threat to American society by the “Evil Empire,” it offered hope, equality, and security to some. 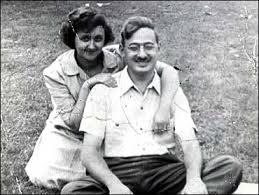 Ivy demonstrates that her grandparents’ innocence is more complicated than a simple yes or no question. Were both Julius and Ethel spies? Were they responsible for relaying atomic bomb information to the Soviet Union, the crime that they were executed for?

All their lives, Michael and Robert Meeropol held with conviction that their parents were innocent, that the government’s thirst for communist blood and David Greenglass’ betrayal had thrust their parents into their position. Even the release of evidence in 1995 from the Venona Project, that demonstrates Julius was a spy (though not Ethel), did not convince the brothers that their parents were guilty. It was the eventual confession of co-defendant Morton Sobell in 2008, that both he and Julius had been spies that changed their minds. Ironically, we see Morty denying throughout Ivy’s film that he and Julius were guilty of espionage. This just goes to show the degree to which human beings are capable of lying and keeping secrets. This thought is revealed in David Greenglass’ interview with 60 Minutes, when he admits his testimony wasn’t accurate and it can be realized how far he went to protect his wife by “throwing his sister under the bus.”

While the Rosenberg case is indicative of the extreme force of the Red Scare in U.S. policy on a domestic level during World War II and the Cold War, the Rosenberg case is still relevant today in considering contemporary diplomatic issues. An interview with the younger son, Robert Meeropol links the WikiLeaks scandal with the Rosenberg case. Robert asserts that the 1917 Espionage Act, which was used to execute his parents, challenges the narrow definition of treason in the Constitutions, and how the founding fathers did not want treason to be used to just charge dissenters. This act, Robert, explains, undermines democracy.

Today, the Red Scare is commonly compared to 9/11 Backlash in the States towards Muslim and Middle Easterners. Robert’s daughter, Rachel Meeropol who was interviewed in Ivy’s documentary is fittingly an attorney with the Center for Constitutional Rights.

Through these examples, Ivy’s point on how human beings shape history is evidenced, and it becomes clear that even how a few generations out, a family tragedy and major historical event is still felt and can drive people. Without perfect records and the keen ability of humans to lie as with Sobell, much in history is murky and it’s questionable how objective of a report we can get. However, one of our best bets could be studying people and how their ideology, interests, emotions, and values align or come to a collision in a given historical episode set in a social and political context. Human beings are complex, but for example, if we look at Ethel Rosenberg and her decision to die after her husband rather than give false testimony, we see how her ideology, interests, emotions, and values may not have all aligned, but her calculation of these factors, with emotion and values probably tipping the scale in her decision.

This entry was posted in Rosenberg and tagged Heir to an Execution, the Rosenbergs. Bookmark the permalink.

2 Responses to Heir to an Execution: feeling out the shades of gray