The Rosenbergs’: Family and Work 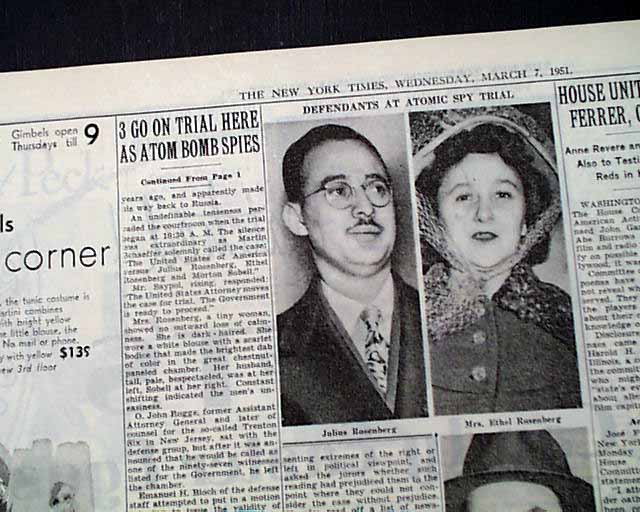 Most people prefer to separate their private lives from their professional ones. In that manner, the person who may be known as a loving and a well-loved parent/ sibling/ cousin to family members may be unrecognizable to these very family members when this person assumes their perhaps strict and cold work persona. If we look at it simplistically, we can argue that the documentary – Heir To An Execution: A Granddaughter’s Story – presents the kind, loving and cherished “family persona” of the infamous communist Rosenberg couple. The documentary captures the quest of the Rosenbergs’ granddaughter who explores and shares more about this aspect of her grandparents in order to humanize them in the eyes of many who condemn them for their treachery and even perhaps, to give herself some closure.

However, the Rosenberg case is hardly a simple one.

In June 19, 1953, Ivy Meeropol’s grandparents – Julius and Ethel Rosenberg, convicted  as spies smuggling classified information on the Manhattan Project to the Soviet Union – were executed by the government of the United States. The Rosenberg trial was a messy affair: the evidence substantiating the conviction was ambiguous, there was bad blood within the family members involved and the general mass was confused and divided. Perhaps it is this lack of clarity, and we can see this in the documentary, that Ivy herself is a little confused about her grandparents’ innocence. It was apparent that Ivy would like to believe that her grandparents were completely innocent (Ethel Rosenberg reiterated this countlessly even till the point of death) but the evidence suggesting otherwise, Julius Rosenberg’s silence and the fact that neither him nor his wife really defended themselves incited doubt. At the time of the Rosenberg trial, it seemed that the decision was taken in haste and with all the vagueness surrounding the prosecution, to many, the Rosenbergs’ appeared as scapegoats of the United States government. This thought was insinuated in a 2003 article by The New York Times:  “The Rosenberg’s case still haunts American history, reminding us of the injustice that can be done when a nation gets caught up in hysteria.”

Recently (after the documentary was made), it was disclosed that Julius Rosenberg was indeed a spy for the Soviet Union during the Cold War. Ethel seems to have not participated directly in the event but knew of her husband’s work and hid it. During the filming of the documentary, however, Ivy did not have such certain information. Even though Ivy herself had her doubts, her purpose was to neither condemn nor to excuse her grandparents’ behavior but to understand them and in understanding them, getting to know them better.

Picasso's depiction of the Rosenbergs'

In this line of thinking, I too can empathize with at least Ethel Rosenberg.  Personally (and especially after the new revelation), it is hard for me to overlook Julius Rosenberg’s and to some extent, Ethel Rosenberg’s betrayal of their country. I think though that it is important to provide the context of the era in which they lived to truly understand why these people did what they did. Idealistic communist youth, the Rosenbergs’ and their socialist friends grew up in and around poverty. They became radicals who believed, like most young people do, that they could change the world. The Rosenbergs’ did not imagine that their punishment would be death, even till the last moment Julius Rosenberg was quoted in the documentary as saying, “I think we might just make it.” They became an object of media fascination, muse of artists and poets and rallying point for different idealistic groups. The entire feel of their prosecution, though severe, was romantic.

Perhaps the couple, so deeply in love and romanticized by so many, got caught up in the moment.

This would explain why Ethel, given the opportunity to avoid punishment for the sake of her children, refused it and stood by her husband. Maybe they believed they died for their cause. Maybe this is why at some point in the documentary, Ivy Meeropol says she was proud of her grandparents – not for their treachery – but for dying for what they believed in. This is not to say that what the Rosenbergs’ did was right. Julius Rosenberg betrayed his country and Ethel Rosenberg placed her ideals above her young children.

Ivy Meeropol’s documentary was very touching. She cares for her family greatly and wants to reclaim them. It is definitely not easy keeping one’s career and family life separate. Especially in the case of the Rosenbergs’, the impact of their actions reverberated to their family sphere. Certainly, the documentary helped to better my understanding of the Rosenbergs’ as ordinary people.