Who’s Guilty of What?

On November 17th, I saw the movie Heir to an Execution. This movie documented the live of Ivy Meeropol’s grandparents, Julius and Ethel Rosenberg through Ivy’s eyes. The year of Julius and Ethel’s execution was 1953. However, why were they executed? The controversy lies in the fact that the Rosenberg’s were the only two Americans to be executed for espionage related pursuits during the Cold War. So, how guilty were Julius and Ethel? Did they actually commit the crimes they were executed for? 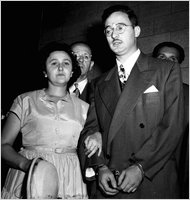 (Ethel and Julius Rosenberg during their trial in New York in 1951. New York Times)

Here is where it starts: they were both accused by Ethel’s brother, David Greenglass, as communist spies living in America during the time of the Cold War. The FBI went to David asking for information on his sister’s husband, and he gave it to them. However, it is unclear that the information David gave was completely factual or not. Years later, David admitted to not fully remembering the evidence he proposed to the FBI back in the 1950’s. He said, “I don’t know who typed it, frankly, and to this day I can’t remember that the typing took place. I had no memory of that at all – none whatsoever…I would not sacrifice my wife and my children for my sister.” David only gave the information the FBI wanted because it guaranteed his and his wife’s freedom. Nevertheless, this only continued the viscous cycle of name giving to the government.

Then, Julius and Ethel began their conviction in the early 1950’s; having two young children with nowhere to go, they kept to each other, side-by-side. The evidence for their sentence was, at best, imprecise. It consisted of items such as Jell-O brand packet labels, a console table, and passport photos of the family. During their trial the country was torn between whether or not they were guilty and the fear, or the reassurance depending on the person, of the communists. Most people at the time lived in worry of Russia invading or attacking America. This only heightened the emotions Rosenberg case because not only did they have two small children while being sentenced for espionage, but also most of society was involved one way or another. In the end though, were they actually guilty?

New evidence came out in 2008 that testified Ethel’s innocence and Julius’s involvement with spying. This article can be found: here. This completely changed the viewpoint of the court case because now society really knows the truth. Before this evidence was released, both of their executions were seen as murders. Now only Ethel’s execution is seen as a murder. But the question still remains, why did Ethel continue to stay by her husband when she had children to take care of? When Julius was executed, their lawyer Emanuel Hirsch Bloch, came over to Ethyl and said, “Give me any name, doesn’t matter if its fake or not, and your life will be saved.” However Ethel did not give a name, she refused. Ethel did this to end the chain. Who would it help to give the government a name, fake or not? That would only put those people through the same misery Ethel and Julius had just gone through. Ethel wanted to be the last link of the chain.

This entry was posted in Uncategorized and tagged the Rosenbergs. Bookmark the permalink.