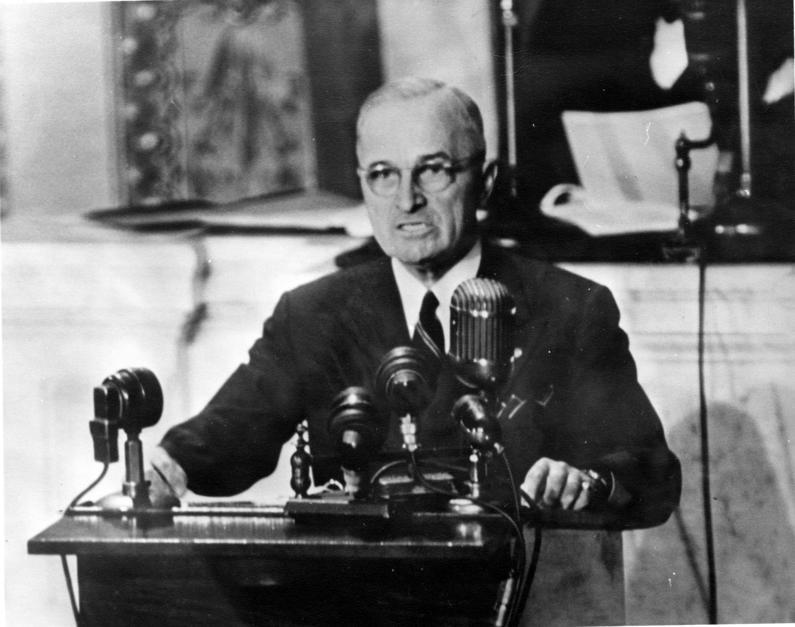 This is a recording of President Truman’s 1947 speech to Congress, where he would outline his Truman Doctrine. Roosevelt’s presidency was a shift from his predecessor, FDR, appeasement and general better relations with the Soviet Union. Truman’s speech recapitulated his position of containment, and specifically encouraged intervention in Greece and Turkey, which where facing communist insurgents. This source essentially outlined Truman’s policy of containment against Soviet communism, rather than FDR’s general better relations with the Soviet ruler Stalin. Truman did not have Roosevelt’s relationship with Stalin, so when he became president relations between the US and the USSR quickly began to deteriorate. The US feared expansion of communism into other countries that were facing poverty and strife after the war, knowing that communist ideals could appeal to them. In essence the Truman Doctrine stated that the US would no longer accept Soviet expansion, and would come to the aid, both economically and militarily, of any nation facing Soviet aggression. Truman would come to agree with public opinion that the Soviets were intent on world domination, beginning the hard-line policies of the US towards the USSR, that marked the Cold War. This would ultimately set the broader US policy of foreign intervention, not just in Europe, but around the world. It would also lead to the creation of NATO in 1949, an intergovernmental military alliance headed by the US and is generally considered the beginning of the Cold War.

This source is a map of the United Nations Trust Territory of the Pacific Islands, made in 1962, and administered by the US. This was one of many Trust Territories made by the UN after WWII, including former German, Italian, and Japanese territory. The purpose of these where to encourage independence and self-rule, while having another country administer their government. While fighting the Japanese during WWII, the US captured several Pacific islands because of their strategic significance. The islands that made up the UN Trust Territory of the Pacific where the Marshall Islands, Micronesia, Northern Mariana, Palau. Most of these island nations would choose to keep ties with the US, with the Marshall Islands, Micronesia, and Palau signing the Compact of Free Association in the early 1980s, while Micronesia would become a Commonwealth. All these islands retain ties to the US to this day, showing the effect of the countries expansion during WWII.

This source is a photograph taking in 1973 during the Yom Kippur War, depicting a tank being unloaded from a US Air Force carrier during “Operation Nickel Grass,” for Israeli forces. The Yom Kippur War had Israel facing its Arab neighbors, mainly Egypt and Syria, over territorial disputes. America already had amicable relations with Israel for some time, being the first country to recognize it as a sovereign country in 1948 by President Truman. By this time, the US was eager to increase its influence in the Middle East, to counterbalance Soviet support of various Arab nations, such as the increasing aid to Egypt at the time. In order to do so, the US decided to provide large amounts of aid in the form of state of the art arms supplies, including tanks, aircraft, missile systems, artillery, and other weapons. This aid would help Israel win the war, humiliating the over numbered Arab coalition, but also tying them to the US. Israel would continue to be staunch US ally through the Cold War and to the present day, essentially becoming a solid foothold for American military activity in the Middle East.