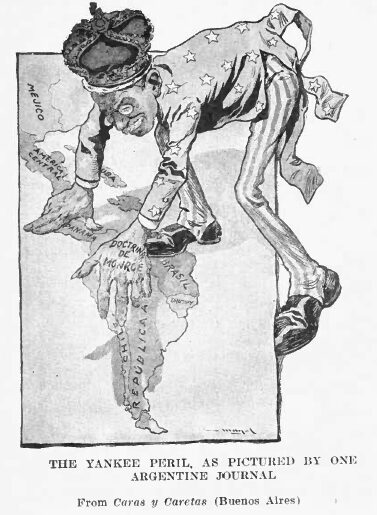 This is an illustration by cartoonist Albert Shaw, created in 1905, depicting President Theodore Roosevelt with claw-like hands labeled, “Monroe Doctrine,” stretched out across the Americas. After the Spanish-American War, the US began to greatly increase its interventions in the Americas, seeing how successful they where earlier. With the presidency of Roosevelt beginning in 1901, he would pursue a much more aggressive policy regarding our involvement in other American nations affairs. The Roosevelt Corollary was an extension of the Monroe Doctrine that was already in place, outlined by President Roosevelt in 1904, which stated that America had free reign to intervene in other countries in the Western Hemisphere if European countries tried to intervene in them. Overall this would lead to many of the interventions in the beginning of the 20th century, establishing the precedent for aggressive expansion by freely intervening when a nation was deemed nonfunctional.

“Theodore Roosevelt and his Big Stick in the Caribbean, 1904”

The journal, “Rough Rider and Big Stick in the Caribbean,” by David Healy, outlines ideas over the early 20th Century American imperialism in the Caribbean, including Roosevelt and his creation of the Panama Canal beginning in 1904. Healy makes the argument that many of these actions were in fact justified, sighting economic and political stability, and the incursions of various European nations in the area. He explains how the Panama Canal not only helped the US economy, but increased Latin American countries independence from European nations. The source also explains the details behind the Panama Revolution, which many view as a forcefully made insurrection by the US in order to gain access to building the canal. Overall, the building of the Canal was another way in which the US integrated Latin America into itself, through the support governments that favored its interests. 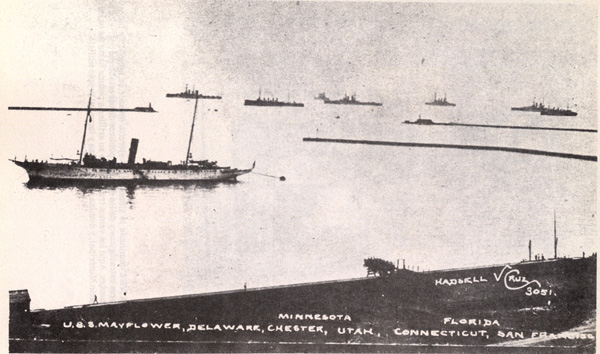 The US fleet off the coast of Veracruz in 1914

The book, “Banana Wars: Power, Production, and History in the Americas,” by Steve Striffler and Mark Moberg, gives the background and reasoning behind the various interventions the US had in the Americas in the early 20th Century. Stiffler & Moberg state that Central and South American countries where not completely dependant, but did rely on the US business for the most part in the early 20th Century. The Banana Wars where a series of conflicts in which the US intervened in Latin American countries to secure its economic interests. Many agreements were created during this period, with countries such as Cuba and Nicaragua, that established favorable policies to allow American investment and ease of trade. These interventions and treaties would cement the Western hemisphere as being subject to the United States, if not physically, economically at least.