The book, “Our Country,” was published in 1885 by American clergyman, Josiah Strong, and outlines his beliefs on America’s role as a country. Throughout the book, he repeatedly preaches Protestant values, and how they’re tied to American exceptionalism. Overall, he champions the notion that Anglo-Saxon Protestants are the strongest group of people, tied to American values such as liberty, individualism, and entrepreneurship. He also brings the fact that Great Britain was the leading European empire at the time, with the US rapidly catching up, and prophesying that we will overtake Britain as an industrial power, due to our, “undeveloped resources of a new country, but more largely to our climate, which acts as a constant stimulus,” and natural social mobility (Strong 174). Though much of the book is written in mind to persuade evangelical Protestants to support missions, it most importantly changed the perspective of Manifest Destiny to a duty towards the world in general. This book would begin the dominant idea of the time that Anglo-Saxon Protestants where America’s best and strongest ethnicity, that would help propel the nation to the world stage and further its expansion. 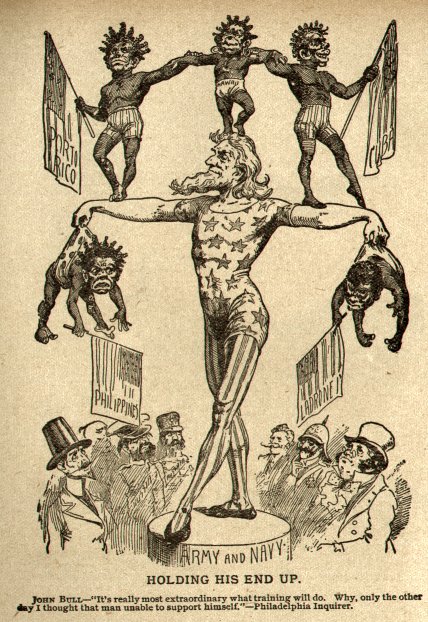 The article, “Josiah Strong and American Nationalism: A Reevaluation,” by Dorothea R. Muller, outlines the connection between Strong’s writings during the late 19th Century and a resurgence in national identity. Throughout her writing, Muller explains how Strong’s ideas of Christian conversion being necessary to the “savage peoples” of Central and South America, would translate to the belief of America’s duty of “civilizing” foreign countries through Anglo-Saxon values. Muller ends her writing with a quote from one Strong’s colleagues, James Ecob, who says, “ It is a matter of common knowledge, that Dr. Strong was one of the foremost pioneers in arousing the nations to the necessity of a New Internationalism.” At this time, “new internationalism,” would come to refer to the growing ideas of international duty that America had to the world, in spreading its beliefs and values. Ultimately, Muller shows the importance of Strong’s writing, that appealed to moral and religious beliefs of Americans, in pushing ideas of imperialism and expansion.

The state of Hawaii was acquired through this early imperialism in the 19th Century, by overthrowing the Kingdom of Hawaii. La Croix and Grandy’s journal, “The Political Instability of Reciprocal Trade and the Overthrow of the Hawaiian Kingdom,” explains this, outlining how US trade policy in the 1870s and 1880s impacted Hawaii, through various protectionist tariffs that were passed by Republican politicians. These gradually decreased Hawaii’s bargaining position in trade, culminating with the McKinley Tariff, that skyrocketed import taxes on sugar, the main export of Hawaii. This would eventually lead to the overthrow of the Kingdom of Hawaii in 1893, as American businessmen residing in the kingdom sought to gain more favorable trade terms with US annexation. Overall, this highlights the connections between economic interests and overseas expansion, and how the US used indirect measures to acquire these overseas territories. This source is an illustration, author unknown, titled, “Civilization Begins at Home,” published by Literary Digest in 1898. The image depicts President William McKinley tentatively staring at a map of the Philippines, while a figure representing Justice pulls back curtain revealing a lynching and several other dead figures, suggesting they are African American. This cartoon is echoing ideas of anti-imperialists at the time, which discouraged the the transformation of the US into an empire not unlike European powers at the time. This cartoon expresses some of the hypocrisy that many Anti-imperialists saw in “expanding civilization” while the country itself was still unequal, alluding to racial violence such a lynchings. This is one of many arguments that anti-imperialists made against the expansion of the US from overseas territories. In the broader sense this was a more moralist approach against expansion, insinuating that if we can’t embody democracy within our country then how would we do so abroad. Anti-imperialism eventually fell out of favor as the US annexed the Philippines, and other former Spanish possessions, but had lasting effect on how Americans viewed these possessions as distinctly “un-American” for the most part. 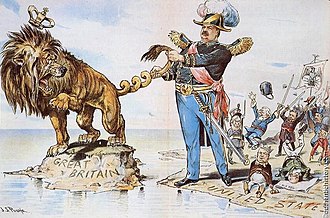 President Cleveland twists the tail of the British Lion regarding Venezuela; Puck, 1895

The book, “American Empire: A Global History,” by A.G. Hopkins puts America’s expansion in a more global light, starting since our country’s beginning to the present day. At its beginning, America could not compare to the long established European colonial powers, such as France and Britain. Hopkin’s explains that the US was very much dependent and intertwined with Britain through trade and diplomacy in its early years. Later on however it would go from matching, to surpassing these countries economically and militarily by the end of the 19th century. Rather than take as much territory as possible, the US would typically only control areas, typically islands, that had economic or strategic importance. Hopkins encapsulates several actions that made US colonialism unique from other countries, such as acquiring a large amount of territory from another empire, and being a supporter of independence during decolonization.