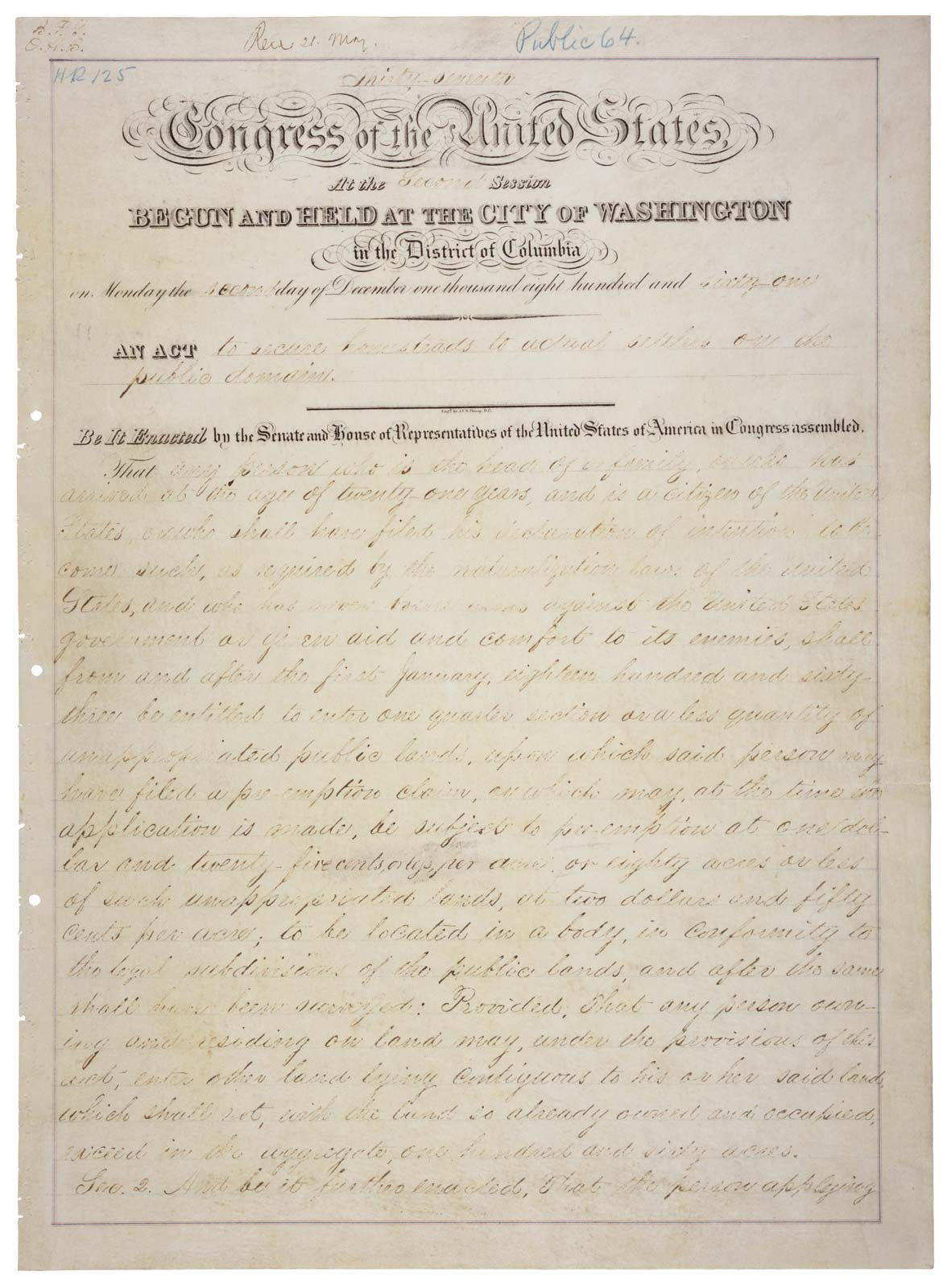 This is the official scan of the Homestead Act of 1862, from the Library of Congress, outlining how it would provide 160 acres of public land to American citizens, provided they lived on it, improved it, and registered for it. The Homestead Act allowed for US citizens to apply for land from the federal government, and opened up a large area of government owned, “open land,” for settlers. After its acquisition of vast empty western land, the federal government wanted to put this land to use, and could do so by encouraging western migration. This document was found in the library catalog, and shows how settler colonialism was officially endorsed by the US government. The Homestead Act was the official beginning of the US policy of encouraging migration of settlers into the undeveloped western territories. This would also lead to conflict with Native American tribes, as the federal government sought to impose its rule in the area, and changed how it treated independent tribes. Rather than treat them as independent nations, the US began to view Native Americans as rebellious people in land they lawfully owned. This would also push ideas within the public of American exceptionalism, and the ability to have socioeconomic mobility, encouraging immigration, and beginning development of the West.

“Sitting Bull, most renowned Sioux of modern history, is dead. He was not a Chief, but without Kingly lineage he arose from a lowly position to the greatest Medicine Man of his time, by virtue of his shrewdness and daring.

He was an Indian with a white man’s spirit of hatred and revenge for those who had wronged him and his. In his day he saw his son and his tribe gradually driven from their possessions: forced to give up their old hunting grounds and espouse the hard working and uncongenial avocations of the whites. And these, his conquerors, were marked in their dealings with his people by selfishness, falsehood and treachery. What wonder that his wild nature, untamed by years of subjection, should still revolt? What wonder that a fiery rage still burned within his breast and that he should seek every opportunity of obtaining vengeance upon his natural enemies.

The proud spirit of the original owners of these vast prairies inherited through centuries of fierce and bloody wars for their possession, lingered last in the bosom of Sitting Bull. With his fall the nobility of the Redskin is extinguished, and what few are left are a pack of whining curs who lick the hand that smites them. The Whites, by law of conquest, by justice of civilization, are masters of the American continent, and the best safety of the frontier settlements will be secured by the total annihilation of the few remaining Indians. Why not annihilation? Their glory has fled, their spirit broken, their manhood effaced; better that they die than live the miserable wretches that they are. History would forget these latter despicable beings, and speak, in later ages of the glory of these grand Kings of forest and plain that Cooper loved to heroism.

We cannot honestly regret their extermination, but we at least do justice to the manly characteristics possessed, according to their lights and education, by the early Redskins of America.”

This source is an editorial by author L. Frank Baum, published in the The Aberdeen Saturday Pioneer, giving his views on the recent Sioux Wars that had been occurring and the general armed conflict that was taking place between the US federal government and various Native Americans in the west. Here he directly references the recent death of Lakota leader, Sitting Bull, remarking on his fighting spirit, as one of the, “greatest Medicine Man of his time, by virtue of his shrewdness and daring.” He then brings ideas of American superiority, pointing to his fall as the end of the last vestiges of glory for Native Americans, and how, “by law of conquest,” America must be the nation to spread across the continent. Again, Baum echoes ideas of both national and racial superiority among Americans, and how it is our nation’s destiny to overtake, and annihilate, Native Americans as rulers of the continent.