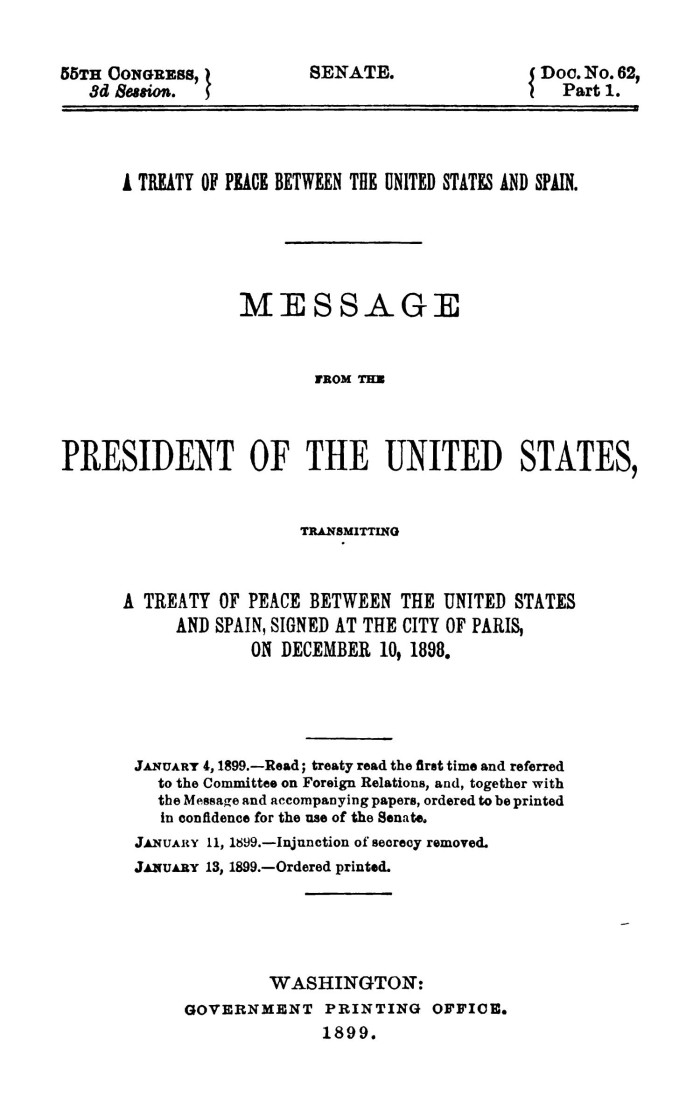 This source is the full text from the 1898 Treaty of Paris, which ended the Spanish-American War. The treaty outlines how that Spain would give up Cuba, the Philippines, and several Caribbean islands that made up the “West Indies,” as well as Guam and other Pacific islands. The treaty also states that 20 million dollars will be paid in return for it.  This document was found in the library catalog database, and shows how the US began to acquire its overseas territories after the Spanish-American War ended from Spain’s colonial possessions. The Treaty of Paris marked the end of Spain as an empire, while beginning the age of America as a world power. It also lead to much debate in the US between pro and anti-Imperialists who supported and opposed this more blatant American expansionism. The treaty would also later lead to the Philippine-American War, in which the native Philippine government fought US occupation, since the Treaty effectively handed over the Philippines with little say from the local government. This established US policy in overseas expansion in the 20th Century, and would include other Pacific and Caribbean islands. This source is an editorial in the Amador Ledger, “Ex-Minister Denby’s Views,” published 1900, by Charles Denby, Civil War veteran and diplomat. Denby worked on a commission appointed by President McKinley to examine the situation regarding occupation of the Philippines, and explains his support for McKinley handling of the situation with the war against Spain and in the Philippines. Denby also appeals to the general sense of urgency, such as, “Then was the time to have talked about the ‘consent of the governed’ and not now, when every speech he makes adds ten names to the roll of our dead and one hundred to the Filipino dead.” Here he refers to William Jennings Bryan’s opposition to the war, and how he views he should have taken more action when the Treaty of Paris and being ratified, rather than now when the US was in a state of war against the Philippine natives. In the broader sense, he is appealing any public opinions that we should not occupy the Philippines, saying now is the time for action. This would push an American view that it is our national duty to intervene in order to secure democracy in other countries.