This is a 1946 map of the occupation of Nazi Germany following World War II, published by the United States Department of State. The map shows where Allied forces of France, Britain, US, and the USSR, split the conquered German territory. The US occupied southeastern Germany and western Berlin, with the US occupying this area until 1949. The US, like other Allied countries, was able to exert its influence on occupied territory, through economic and other policies throughout its administration of the region. This occupation would ultimately lead to the creation of the Federal Republic of Germany(West Germany), which was a staunch Western, and in extension US, ally during the Cold War. West Germany’s economic success, in comparison to its neighbor East Germany, would be an illustration of US economic policy, and its ability to help allies rebuild from the post war destruction, being a model for other nations seeking US help, and intervention.

This source is a propaganda poster for the Marshall Plan, created in 1950, showing the sixteen countries that received aid from it. The map displays the flags of the European countries as the blades on a windmill, with the blade on the back a US flag, seemingly pushing along the other countries. The caption reads, “Whatever the weather we only reach welfare together,” again enforcing the need for US intervention in Europe especially at this imperative time after the war. The Marshall Plan was created in 1948 under President Truman, and gave around $12 billion to provide economic support to the worn torn economies that were not part of the Eastern Bloc, countries under the influence of the USSR by this point. It also sought to ensure that free-market capitalism would thrive among the countries of Europe that received aid, as well as stop the spread of communism by limiting poverty and starvation. Most notably though, it would mark the beginning of permanent US intervention in European affairs, setting up the allies for a possible war with the Soviet Union, and encouraging economic expansion through trade with Europe. 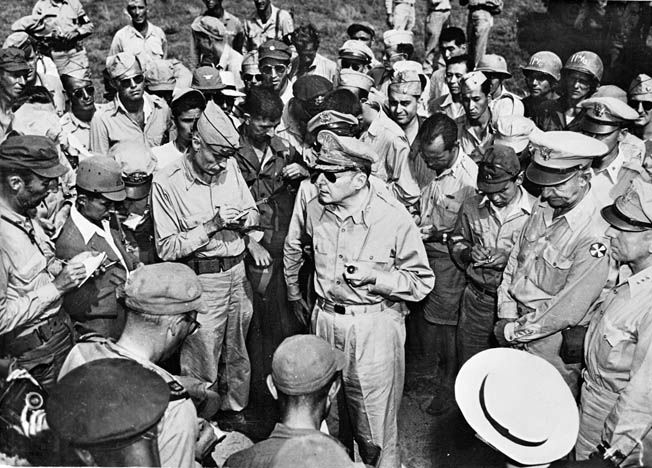 General Douglas MacArthur shortly after his arrival in Japan, August 1945

This journal, “Information, Re-education and Re-orientation Policies in the US Occupation of Japan,” by Maho Toyoda, explains the efforts the US went through after WWII to rebuild Japanese society. Toyoda explains how the occupation of Japan is viewed by many as the “ideal occupation,” since it fundamentally changed Japanese society to favor American values. She also explains how American propaganda worked to create an image of, “an American lifestyle of abundance and freedom,” leading Japanese to willfully rebuild their own economy into a capitalist powerhouse. With the rebuild of Japan, the US would create a staunch Cold War ally in East Asia, that would work to counterbalance the Soviets and Chinese. The US would also establish military bases in the country that would continue in use to this day.