the one where my life would become aca-awesome

I think it’s pretty safe to say that mostly everybody has seen the movie Pitch Perfect. You know, that movie about the ICCAs (that stands for the International Championship of Collegiate A Cappella). I am actually one of the few people that haven’t seen the movie, so I can’t say too much about it. I do know that the acapella group in the movie ends up winning the competition, of course.

Anyways, the ICCAs are a real competition where over 300 acapella groups from around the country compete to be named the best acapella group in the country. This year, after a group vote, the Dickinson College DTones, of which I have been a member since my freshman year, decided to enter the competition. I will admit, I was a little bit hesitant to enter. Not only would I have to dedicate more time to singing, but the group also decided that one of three songs that we would be singing for our audition video was my solo, “Bottom of the River” by Delta Rae.

Here is a video of my group performing the song. I think this was the first time we performed it in front of people. I was terribly nervous and listening to myself sing will always be weird and uncomfortable.

Anyways, we performed my solo, “Say Something” as performed by the Pentatonix, and “Sound of Silence” by Simon & Garfunkel. To prepare for the ICCAs, we extended our practice time to two hours instead of an hour and a half. We had performed “Bottom of the River” a million (not an exaggeration) times last semester, and “Sound of Silence” was learned for Parent’s Weekend, so the main focus of our practices was often learning”Say Something”. We would always sing the other two songs though, just so that we didn’t forget them.

Sometimes we had practice in The Site, which is the on-campus dance studio. There’s a huge mirror in there, which was good because we had a lot of choreography to learn. The choreo was hard to learn at times. There were so many little moves that were essential to the piece that it was often easy to forget which leg we stomped on for which song or which arm we raise first for another. 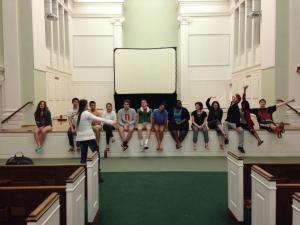 The DTones getting ready for the Spring 2014 concert in Allison Hall.

After weeks of practice, we recorded our video on Thursday October 30th. The video was submitted that night, as the deadline was Halloween. After the video was submitted, the president of our group notified us that our results would be available on Saturday November 15th.

Saturday morning rolled around and none of us had heard anything. I was sitting at breakfast with one of my friends when I decided that I would check Facebook. The Dickinson Infernos, another acapella group on campus, had also auditioned for the ICCAs and had posted a status saying that they had gotten in — congrats to them again! I have a lot of friends in that group, so I was very excited for them to have gotten in. In the status, they also gave a shoutout to the DTones for getting in. I wasn’t sure what was going on because, as I said, none of us had heard anything yet.

I immediately went to the official website of the ICCAs and sure enough, under the Mid-Atlantic category, the Dickinson College DTones were listed as one of the 300 groups that would advance to the quarterfinal round.

As of right now, what comes next is a road trip to Penn State on February 7th (I think). There are two other locations for the Mid-Atlantic quarterfinals, but I’m almost positive that that’s where we’ll be going.

Even if we don’t get very far in the competition, knowing that we even had the opportunity to go to the competition is something I’ll always remember.

*featured photo can be found here*

This entry was posted in Student Blog Project 2015 and tagged syndicated. Bookmark the permalink.