In my blog post today I will explore how government ownership over Yemeni Media which has resulted in mass censorship.  As of 2011, The International Media Support  or (IMS) cited that  self-censorship was very prevalent in Yemen “due to mounting pressure from government authorities, several high-profile cases of media outlets being closed down, and journalists being prosecuted.” 13 Years ago, following a massive rise in conflict in south Yemen, the government banned eight prominent daily and weekly newspapers, some of which remain closed.

Presently, a combination or unrest specially airstrikes has made Yemen a very dangerous place to be a journalist. For example, in April 2015, a Saudi airstrike hit the Sana’a office of TV station Yemen Today, killing a journalist and other employees. The Committee to Project Journalists estimates that at least six journalists have been killed since the airstrikes began.

Due to the mass censorship of television ,radio ,and newspapers by the Yemeni state, the internet allowed for a more open and independent media environment. Al-Tagheer for instance  was created in 2004 and was considered Yemen’s first independent news website. Two things I picked out when researching the internet domain of media regarding Yemeni.  Those being the amount of illiteracy within Yemen and the fact that even  the internet within Yemen is far from a bastion of free speech.

While internet access has risen immensely in Yemen since 2005, Yemen still falls behind other countries in the region becoming globalized on  the web. With regards to illiteracy in Yemen adult literacy was estimated at 65.3 percent by UNICEF in 2012 and that internet access is restricted mainly to only major cities. This situation has been compounded by the ongoing conflict that has damaged the already very weak communication network. Facebook is by far the most popular social media platform. However, it is estimated that only 1.5 million of the country’s 24.5 million residents are active users. 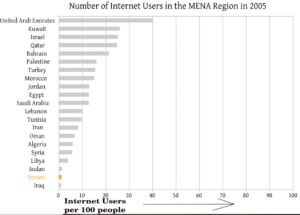 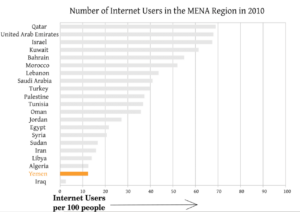 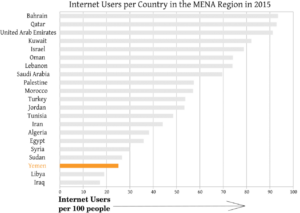 Source:A better understanding of the media in Iraq, Libya and Yemen | CFI