Waltz with Bashir and Black Hearts

In this blog I will discuss the film “Waltz with Bashir.” This is an animated film from 2005 that would go on to win the Academy Award for Best Foreign Language Film. The film serves as a sort of animated documentary and documents events in Lebanon in 1982. The film opens in the form of a nightmare, Boaz Rein Buskila an IDF soldier from the Lebanese war recounts a pack of 26 feral dogs running to his apartment. It is later revealed that this was a representation of the 26 dogs he killed while in the IDF. He discusses this nightmare with Ari Folman his comrade from the war and current film director. He asks Ari if he ever has nightmares. Ari replies he doesn’t, and that he actually has large gaps in his memory of the time.  This was particularly shocking to Boaz. This is because Ari was present when the massacre at Wadieh would take place. This conversation sparks him to revisit his time fighting and, ultimately, his regrets.

The movie begins by dialoguing the events leading up to the massacre. the military presence has a grip on the region at this time. However, in the end they do nothing to prevent the atrocity from occurring.

As the viewer, we get a birds eye view to see how events are shaping towards the buildup to the massacre. Until eventually things go entirely off the rails. It is evident that military forces were not suited to handle this situation and they did not have the means to prevent it. The military was clearly not prepared for what was about to happen, and they couldn’t do anything to stop it.

The massacre is portraited in a gory manner. Bodies lay stagnant everywhere and the tone is dire.

In the end, the movie came across as both a horror movie and a tragedy. It is a tragedy of the war with rich symbolic meaning. Bashir  on the other hand describes the waltz with bashir as “a comedy mixed with a tragic love story, and a vision of reality shot through with black humor”.

The most provocative moment in the film to me was the ending. In the conclusion, the animation switched over to actual footage of the events leading to the massacre. The film truly shines a light on war crimes and those involved were blind to them in large part.

The film draws several parallels to a book which I am currently reading: Jim Frederick’s 2010 book Blackhearts: One Platoon’s Descent into Madness in Iraq’s Triangle of Death. 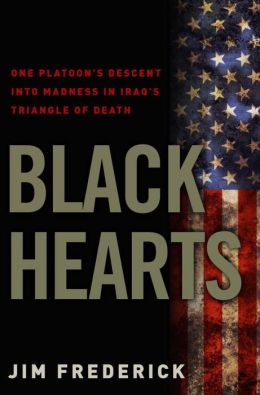 In Black Hearts, B Company, 1/502 (1st Battalion, 2nd Brigade) and their yearlong deployment in South Baghdad is documented. In the book, lapses in the higher echelons of leadership. As well as a failure to maintain uniform standards, coupled with the hardships of IED warfare, specifically the surprise nature of them lead to the Platoons decent into madness. During this, it is documented that some severely troubled individuals fail to uphold the moral and ethical standards of the U.S. Army. Soldiers would beat up locals, abuse drugs and alcohol, and even would engage unarmed civilians.

Between both of these sources, a common theme sticks out to me and that is the futility and horror of war.

This made me deeply reflect on the continued conflict within Yemen. The psychological damage of having what will now be an entire generation mired in a time defined by internal strife is beyond awful. Watching this film makes me ponder how the scars of war will ultimate impact Yemeni politics and personal identity for years to come.

Waltz With Bashir Movie Meaning And Ending – Travel & Movie on the outside (authorityviewss.com)