Writing for Truman:  A Former Speechwriter Recalls the Election of 1948 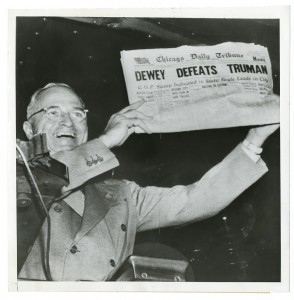 Dick Neustadt was a twenty-four-year-old assistant speechwriter on Harry Truman’s 1948 campaign staff. He recalls riding the Ferdinand Magellan –the president’s specially outfitted locomotive train– for nearly all of the 32,000 miles that the exhausted entourage covered between July and November. “We slept in shifts,” Neustadt remembers, “and as the low man, I was the one who often ended up typing in the local color stuff at 4 a.m. before the next day’s speech.”[1] Finding “local color” to differentiate over 350 speeches proved a difficult task for the overworked young aides. Neustadt once wrote a speech for the president that had him mistakenly praising the Republican opponent of a startled Democratic mayor in one of the smaller Midwestern “whistle-stops.” According to the former speechwriter, however, such potentially career-ending episodes simply got brushed aside in the exuberance of the hotly contested campaign. “The President knew he was going to win,” Neustadt claims, “and didn’t care if he said the wrong thing occasionally or botched a name here and there. He was confident –almost cocky.”[2]   This memory contradicts standard interpretations of the 1948 contest that emphasize what historian H.W. Brands calls “the most stunning upset in American political history.”[3]   Instead, Neustadt’s recollection more fully supports the revisionist view of scholars like Harold Gullan, who pointedly labels the 1948 result as “The Upset That Wasn’t.”[4]

NOTE:  This opening is just a sample, based on a “true story,” but it is not quite a true story.  Richard Neustadt was a Truman speechwriter on that campaign, but the interviews cited below and some of the sample sources are invented here for the purposes of illustration.

Richard E. Neustadt, age 79, retired Harvard University professor who worked in the Bureau of the Budget during the late 1940s and served as a junior speechwriter during the 1948 presidential campaign

[NOTE:  For illustration purposes ONLY; this was not an actual interview, but has been reconstructed based on recollections of conversations and should not be quoted or used as scholarship]

Q.  Did everybody seem anxious about the polls and how far behind President Truman seemed to be in the contest against Dewey?

A.  “Well, I sure as hell was, and so were some of the others, but I’ll tell you, not Truman. The President knew he was going to win, and didn’t care if he said the wrong thing occasionally or botched a name here and there. He was confident –almost cocky.  It was really something to behold.  I never saw a candidate so sure of himself.”