The intersection of race, art, and poetry is just one of the many forms of voicing, remembering and monumentalizing histories that have been forgotten. What Natasha Trethewey, the author of the of poetry collection Monument (2018), does is situate readers in historical narratives that blend with her own. In the Poem “Taxonomy” by Natasha Trethewey, the poet splits up her piece into four numbered poems that are based on different casta paintings by Juan Rodríguez Juárez in the 18th century. These casta paintings were commissioned in New Spain at the time, by unknown patrons (Khan Academy). They speak of the formulaic results of the mixing of the different races during colonialism and  propel stereotypical narratives of those who inhabited those lands. Just as art was used to portray what the colonists tried to state as fact, Trethewey utilizes poetry as a tool for making race at the forefront of contemporary dialogues. Trethewey shows the importance of memory and the assurance that it lives on through written word often grounded in historical photos and paintings. Poetry becomes a way to evoke in readers the emotions and historical context concerning issues of race to past and present narratives. More specifically in “2. De Español y Negev produce Mulato, ” a section from the poem “Taxonomy,” Trethewey utilizes ekphrasis, which is the “description of visual art” to contextualize her work into the past that demands attention and relevance today (McHaney). It is through her eyes that readers of “Taxonomy” can piece together narratives that shaped the perception of races, and live on to this day. 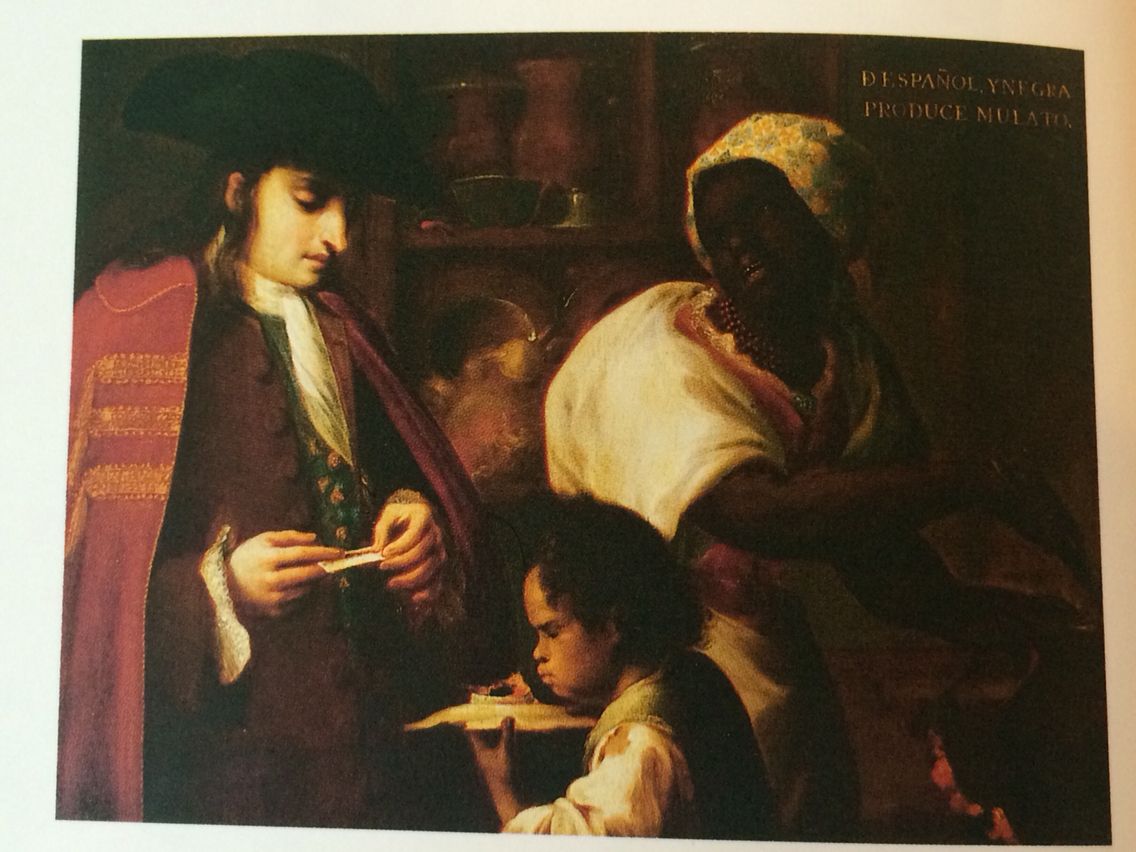 The inscription in the top right read “De Español y Negra Produce Mulato,” which became the title for Trethewey’s poem. Images of paintings are not included in the poet’s collection.

In the section “2. Espanol y Negra Produce Mulato,” Trethewey starts with the inscriptions in the art as the title for the poem. In the piece, she uses ekphrasis to describe the painting of a Spaniard and Black women on either side of a young boy referred to as “mulato” (141). The poet goes on to describe the racial dynamics and components that make it a casta painting. She even asks what we should do about these different components that such as the inscription in the corner serving as a taxonomical title of the art and the depictions of racial stereotype in the portraits. She states how the artwork and the story changes if we took out the inscription or hid the child. Trethewey then writes,

The boy is a palimpsest of paint —

layers of color, history rendering him

that precise shade of in-between.

Before this he was nothing: blank

canvas— before image or word, before

a last brush stroke fixed him in his place. (Trethewey 142)

Trethewey not only describes the creation of the artist who represents the hegemonic society of New Spain, but uses an interrupted phrase to dig deeper and go beyond what the finished artwork depicts. In using this literary device, the poet expands upon the word “palimpsest,” which is defined as, “something such as a work of art that has many levels of meaning, types of style, etc. that build on each other:” (Cambridge Dictionary). In the interrupted phrase, Trethewey uses words like “layers” and “history” allowing readers to understand the depth behind the surface of a canvas. This device gives the poet the space to insert a  reversed timeline at the end of the poem, a reminder that art speaks to the past, present, and future state of humans. In doing so, it is like she lets the reader become the artist and see the reverse progression of the artwork. She starts with undoing the layers, then situates readers by presenting them with the boy’s “precise shade.” Finally, the poet takes us all the way back to the “blank canvas” (142). At that moment Trethewey ends the interrupted phrase and continues with the rest of the sentence. In doing this, she suggests that the mulato child has no identity beyond that which the artist (colonial Spanish society) create for him.

In the interrupted phrase, it is evident that Trethewey’s word choice holds powerful significance to the title of the entire poem, “Taxonomy.” This word itself stands for “the science or technique of classification” (Dictionary.com), which add weight to the words “fixed” and “precise” (142). These words illustrate an exact classification of the shade of the mulato child, despite the layers of colors it took to paint him, and the real identities of children from European and African descent. And so just as the paintbrush is a tool for the artist to translate stereotypical portraits and environments of miscegenation, Trethewey’s words are tools for the readers to analyze the depiction of race in art.

One thought on “The Art of Taxonomy and Poetry”