Picture this, your mom introducing you to family and friends as her artist son living in New York City, and then finding out that your father was himself a painter. GB Tran only begins to dissect the memories that tell his story by the act of drawing and writing. The author takes this a step further by incorporating art into his art. I’m Vietnamerica, GB Tran presents readers with a compilation of layered history in his graphic novel, uncovering his experience learning about himself and his family. He highlights what is erased, forgotten and remembered by pulling it into the present.

When GB Tran finds his father’s painting in his grandfather’s home, Tri immediately tries to avoid further conversation by leaving the house. What GB does between pages 23-4 is show himself and his father interacting with art. After being denied an explanation from his father, the next three panels on page 23 show a close-up panel of GB’s face in between panels of his father’s painting also close up. This creates a sense that he is observing the art intensely, and trying to make sense of what just unfolded before his eyes.

The first half of the next page is filled with square panels describing Tri’s art, his success and the eventual destruction of it. The text narrates how his paintings were left behind and destroyed after fleeing Vietnam. The bottom half of the page continues in square panels but appears to show a backward progression of GB father’s life, followed by a forward progression of his mother’s life. The narration begins with “Sometimes doing what’s right means leaving things behind.” (24) In his father’s three panels, a watercolor impression of what appears to be Huu Nghiep is in the background. There is a clear distinction in the artistic depiction of GB’s father and grandfather, illuminating the continued absence of Huu Nghiep in Tri’s life. When Tri left Vietnam, he was not only leaving his art behind but also leaving a wider gap between him and his father. The narration on the rest of the page introduces a Vietnamese saying: “Our parents care for us as our teeth sharpen… So we care for them as theirs dull” (24). This gives light to Tri’s seemingly apathetic behavior towards his father. Huu Nghiep was not there to raise Tri as he vanished from Tri’s life very early on. Through the painting and GB’s artistic styles, we begin to see why Tri claims he didn’t reach out to his father for over 50 years.

GB Tran pairs words and art to tell a story of his experience visiting Vietnam. At age 30, he is only looking at his father’s painting, but by uncovering Tri’s past, he can observe what isn’t seen on the surface, all that his father does not tell him. Vietnamerica is like looking at a time-lapse of a mixed media painting. But while this graphic novel does not follow a linear trajectory, viewers are still able to see what it took to get to the present day. We see what has been erased, painted or drawn over, just like the memories of characters GB Tran navigates throughout this body of work. 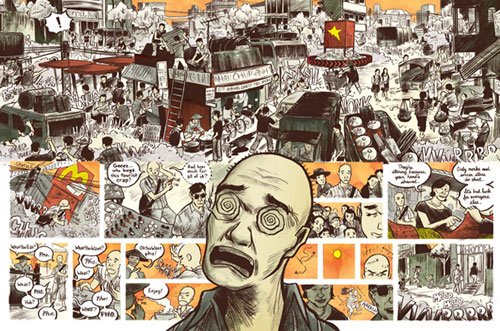