If there’s ever an appropriate time to speak your mind casually, it’s with your friends, when you can be your most uncensored.  However, the thoughts we share casually might often be derived from unconscious stereotypes.  In Kamila Shamsie’s 2017 novel Home Fire, the character Eamonn is the son of Britain’s Home Secretary who is known for his rigid stance against British Muslims involved in terrorist organizations and who has suppressed his own personal Muslim upbringing.  Eamonn is also romantically involved with Aneeka, who wears a hijab and whose twin brother has left England to join ISIS in Syria.  In the novel, Eamonn’s friends begin to mock his involvement with a more traditional practicing Muslim woman, utilizing the literary device of hyperbole to tease him.  Through the crafting of Eamonn’s character, Shamsie exhibits how difficult it is to adhere to two separate societal expectations of culture.

In one particular scene, Eamonn meets his friends in a park for what ends up being a laid-back sort of intervention on account of him spending much of his time with Aneeka over them.  Eamonn is jokingly judged by his friends for beginning to “act” Muslim, contributing to the notion that if he wants to fit in with his British friends, he needs to act less Muslim, and more standardly British.  His friend Mark jokes, “Twenty-something unemployed male from Muslim background exhibits rapidly altered pattern of behavior, cuts himself off from old friends, moves under the radar.  Also, are we sure that’s an evening shadow rather than an incipient beard? I think we may need to alert the authorities” (Shamsie 84).  Another friend goes on to joke that they haven’t lost him completely because he is still drinking alcohol.  This phrasing in particular suggests that Eamonn’s supposed shift toward becoming more Muslim culturally sparks an influx of culturally essentialist jokes by his British friends.

The hyperbole stating that “we may need to alert the authorities” connotes that any linkage to Muslim tradition must be something worthy of reporting as suspicious behavior (Shamsie 84).  In passing this exaggerated implication in a casual, joking manner, Eamonn’s friend Mark helps illuminate how commonplace it is to assume that a British individual with strong links to Muslim identity becomes an internal enemy to England. 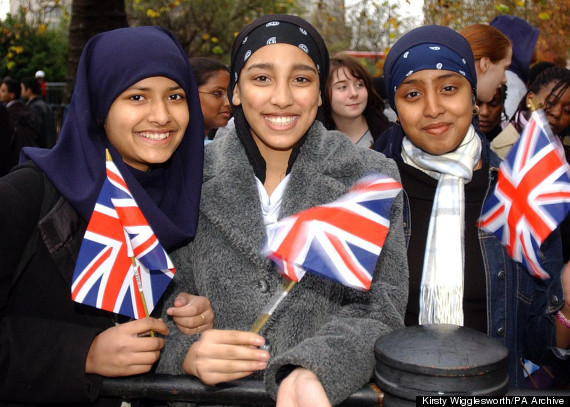 The effect of hyperbole in this example directly correlates to the understanding of Eamonn’s friends regarding British and Muslim identity.  Individuals such as Aneeka’s brother, who isolated himself from his family and defected to ISIS, act as a scapegoat for the type of cultural stereotyping people have about British Muslims.  Anybody in England with any sort of Muslim identity becomes immediately stigmatized as dangerous when there is an “altered pattern of behavior” (Shamsie 84).  While Eamonn’s friends might be exaggerating in their joke about alerting the authorities, their joke is a harsh reality for Britons who feel a need to protect and separate Britain from Islam.

The American society is decorated with a history of racism and as of today, racism is still prevalent everywhere you look because America has imbedded race in everything, to the point when it dictates how you are treated. In the book Citizen by Claudia Rankine, particularly the story Stop and Frisk the literary device allegory is used to explain a symbol that conveys a deeper meaning, that symbol in this case is the process of a Black individual being wrongfully accused for something they didn’t do and the deeper meaning is the racism Blacks go through when they are unfairly accused of a crime.

Within the first passage of the story is this quote, “Everywhere were flashes, a siren sounding and a stretched-out roar. Get on the ground. Get on the ground now. Then I just knew.” This shows what exactly happens when a Black person is pulled over by the police. The Police become overly aggressive as a reaction from fear of blackness and the Black individual does everything, they can to seem less dangerous by cooperating and being selective, cautious with their tone and diction, one wrong move and it’ll all escalate. All you can do is cooperate because of the fear of dying. In the sixth passage there seems to be a conversation with the police officer and the Black man, or the Black man is having a conversation with himself within his subconscious as a way of trying to understand the situation he’s in. The dialogue has no parentheses, but it includes the words, “You didn’t do anything wrong. Why am I pulled over? Put your hands up.” However, thinking of that dialogue now it could just be him reassuring himself of what to do, even though he knows he did nothing wrong he also knows that the police officer doesn’t care if he is guilty or not so it’s best for him to just cooperate and appear less as a threat.

Nevertheless, Black men have been accused of crimes and misdemeanors that they didn’t commit but because they’re Black they were still blamed. Claudia Rankine states, “And still you are not the guy and still you fit the description because there is only one guy who is always the guy fitting the description.” This is saying that yes, a Black man can be innocent but because he fits into a stereotype that all Blacks are dangerous and cause chaos in society, he often isn’t believed, he’s mistaken for something he isn’t, which connects back to the way your treated in society depending on if you’re White or Black and on how close you’re to whiteness which is acceptable in contrast to blackness. It shouldn’t be like this, but it is, and it won’t change until the actual aggressor changes their tactics and stop reacting with racial fear.