Living in a place like Connecticut, in the suburbs of New York City, my town has a chronic lack of diversity in many ways. This includes a lack of racial, ethnic, and religious minorities. We see very few people with visible disabilities, as I come from a wealthy area where most people have adequate access to treatment for both physical and mental illnesses. 92% of the people in my community are white, and live in homes that are the picture of suburbia. 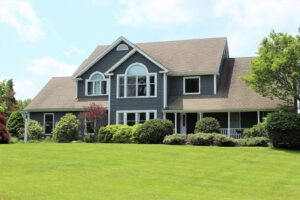 For example, this is a home from one of the neighborhoods in my town.

Because of this, the easy answer would be to talk about anyone that does not fit the privileged white, Christian, European lens of “normality”. However, I want to discuss this question from another angle. The people that in my perspective, that I view as “others” are the ones who do not recognize their privilege. As those who cannot hold themselves accountable for things like micro aggressions and prejudice against others.

Living in this kind of bubble, it is easy to watch people develop biases, but simultaneously know that their biases are wrong. I come from a very leftist community, where the average political leaning is liberal, but the thing is that people use this title as a mask to hide behind, while perpetuating, in my mind, their backwards ideologies. I want to use an example from a class I took in high school. It was a philosophy elective, and the teacher was one of my favorites, who always knew how to push the limits of people’s opinions within the bounds of his classroom. One day, he assigned us a journal entry. The prompt was to acknowledge a time when we had been racist. He emphasized that he was confident that we ourselves were not racists, but that we had grown up in a society that perpetuated racism, and that some point or another, in some way, he knew that each of us had been racist in some form, whether that be being nervous while a black man were walking behind us in the street, or looked at a person of color and has an immediate assumption about them, purely based on the color of their skin.

I loved this assignment, because he was right. Growing up in a society like this, we, meaning those within my community, were all made, in some way, to have some inherent bias, whether we actively worked to remove it or not. It was eye-opening. This assignment made me call myself out on my actions, and I can confidently say allowed me to grow as I now practice calling myself out on these kinds of things. What really made me start grouping some of the people in my community into a group of “others” was the fact that some people in my class were so afraid of being seen as racist, that they refused to call themselves out on any of their actions. It’s not that I don’t understand this thinking, as calling yourself out always leads to the risk of being seen as being inherently a bad person, and not that society has built you to have these knee jerk thoughts about other people based on some arbitrary piece of their appearance or behavior.

In my opinion, I view these people as “others” because they refused to call themselves out. We all knew that everyone had an example to write about for my teacher’s journal prompt, but some were too scared to admit it. I do not see the possibility for growth without calling yourself out. Some of my classmates chose to hide behind their privilege and not acknowledge their biases. I don’t want it to seem like I’m calling these people bad people because of this- it’s certainly a complicated subject. This is not to say that watching them refuse to learn from themselves did not impact my perceptions of them. I was disappointed. In my mind, refusing to confront yourself and remaining willfully ignorant of your own impact on the world is just perpetuating the problem. It’s then a conflict of how do you call these people out without pushing them into a deeper state of denial? 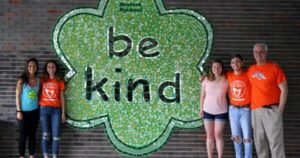 This mural is at the front entrance to my high school, and is a pillar of our beliefs. Fun fact: I got the outline of this flower shape tattooed on my forearm a couple weeks ago- it is a major representation of community for me.

My way of seeing the people who were unwilling to grow and learn from their mistakes, in terms of social issues, as the “others” in my community fails to help the problem, too. Making people who are trying to be good, but are afraid to acknowledge that they have, though unintentionally, done something perceived as bad, feel even worse is not the answer either. I can’t say that I have a set answer on how to get people to confront their biases without making hem feel othered. I feel as though the Stephen Walt optional reading from class applies well to this scenario. He argues that perceptions are based on identity factors, particularly ideological ones. This is a pretty direct relation to my perception of my classmates, in which that those with slightly different ideological beliefs than me are the first to come to mind when I am asked to talk about the “others” in my community. This way of perceiving others and grouping them into a totally different box just based on their way of thought is a dangerous way of living, especially when even for this assignment I do it on such a small scale.

3 thoughts on “The ‘Others’ in our Communities”