Looking at my results, I use an average of 1,879 gallons of water a day, 13,153 a week, and 683,956 a year, compared to the US average of 1,802 a day, 12,614 a week, and 655,928 a year. To say the least, I am shocked. I have always viewed myself as a sustainable person, always recycling anything I could, turning off the faucet while brushing my teeth, taking short showers, and turning the lights off when I leave the room, so when I saw such a large number of water as my daily usage, I was incredibly surprised. This is also probably due to the fact that I really have no concept on the volume of water used in honestly, any aspect of my day, so I guess I should have gone in with zero expectations. All I know is that I definitely waste a lot of water when I cry watching Grey’s Anatomy.

For reference, this is a biblically accurate recreation of my friend Nathan and I’s reaction to season 11, episode 21. 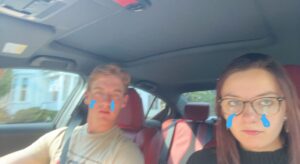 (Condolences would be appreciated, and I extend mine for whoever has had the displeasure of watching that particular episode)

My specialization is in the Peninsula, and my water use is not out of the ordinary compared to many of the states making up this sub-region. The per capita water usage in Yemen is 660 gal/day, 1,347 gal/day in Saudi Arabia, 2,272 in the UAE, 1,505 in Kuwait, with no data for Bahrain, Qatar, or Oman. The obvious standout in this group is Yemen, with the per capita usage being only about a third of my personal water usage. However, compared to Kuwait, Saudi Arabia, and the UAE, my water footprint is pretty consistent with their per capita usage.

In my opinion, this massive difference in water usage between Yemen and the rest of the states mentioned is best cited to the political difference between these states. While social and economic factors are important, they are usually dependent on the political stability of a state. In a place like Yemen, with little political stability and infrastructure not being taken care of, there is little access to clean and safe water for the general public. In addition to this, without a stable government, it is nearly impossible to make agreements with neighboring countries to gain access to their clean water resources or reserves. Yemen does not have the money to spend, to purchase this water for their citizens. Other states that do have this stability, are able to put together clean water infrastructure, or negotiate with other countries to create some trade for clean water. Obviously, the water footprint of these states is going to be higher, as they have a greater access to these resources.

To help visualize this, below is a map of the severity scores per district, in terms of the water crisis in Yemen. 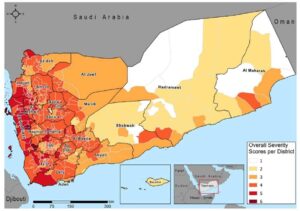 In a place like Yemen, this pattern of water unavailability makes it almost impossible to live sustainably. When you are in such a crisis that water is hardly even available, you are not going to be weighing which options to choose at the grocery store, on what food uses the most plastic packaging or not, or what was farmed ethically. You’re obviously just going to be worrying about what you can afford to take home, as those other factors are not at all important in a situation like this.

Other states in my area of specialization, like Saudi Arabia and the UAE, have this option for individuals to choose whether or not they want to focus on living in a more sustainable way. They have a more stable government, economy, and social scene, and therefore do not have to worry about their basic human rights, and can draw their attention towards things of this nature. This stable government and economy allows for the general population to be more wealthy than that of Yemen, and we see this reflected through the water usage in these locations. Wealth allows people to afford more water-related goods, including items that are known for their abundance of water usage, like a washing machine or dishwasher.

While many places are trying to advocate for sustainability, water use is a privilege, so the more privileged the members of a state are, the more water they are going to use, whether intentionally or not. This lack of water use in Yemen draws a direct line to the political, economic, and social state of these countries.

Be the first to reply