On Saturday October 2nd, ALLARM piloted using the Chesapeake Bay Program Macroinvertebrate collection method with Stream Team volunteers in York, PA at Mill Creek. The event was exciting, and the weather was perfect for our activities. We were surprised after driving through urban York to spot a bald eagle flying overhead. We learned from Mark and Lettice, who’s Stream Team site we were visiting that they regularly see the eagle when monitoring.

Once everyone arrived, we did a quick round of introductions and then began reviewing the technique we would be using to collect macroinvertebrates. After breaking up into groups of three, teams set up their D-nets, rubbed rocks for bugs that were in front of the net, and proceeded to kick or do the macroinvertebrate shuffle in front of the net. The collection process lasts 60 seconds and is repeated twice. 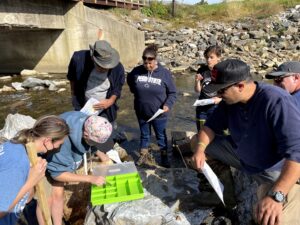 As macroinvertebrates were added to the sample bottle, we pulled examples of what was found. Looking at and identifying the different families of macroinvertebrates was one of the highlights of the trip. It was fascinating and surprising for both of us – Cat and Claudia – to see how diverse the macros were and how healthy the stream appeared with the juxtaposing urban environment in the background. We collected specimens such as water pennies and mayflies, which are both pollution sensitive.

Another highlight of the event was being able to connect with the volunteers we had previously met at virtual events. It was exciting meeting new and interesting people with diverse backgrounds – some of them being experts and educators in water quality and environmental science. There was a lot of excitement and chatter in the air, and it was rewarding to see the passion and eagerness of the volunteers. Overall, it was a successful and exciting event and both of us had a blast. 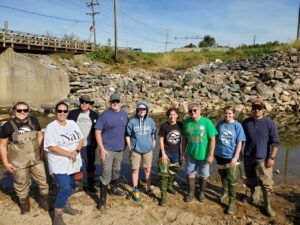