Media Uncertainty in A Hypothetical Regime Change in Turkey

The country of Turkey is not new to regime changes after experiencing a multitude of changes over a course of 200 years. Shifting from constitutional monarchies to “Republican experiences”, the election of Tayyip Erdogan’s ushered in a Democratic Parliamentary Republic. However, in 2018, a referendum to the constitution granted Erdogan total control of the executive including, “the power to issue decrees, appoint his own cabinet, form the budge, dissolve parliament early, and fill the courts”. The powers of both the Prime Minister and cabinet soon dissolved. This executive control has led to more strict control over the media and the information it publishes.

The media in Turkey is fairly restricted and suffers from self-censorship and governmental censorship and recently, after the implementation of new amendments further criminalizing free speech, the access to information not crafted by the government is extremely limited. Considering this and following the history, if Turkey were to undergo another regime change, the best option would be to first turn to the international news sources such as CNN Turk, or BBC Turkey because I know the information coming from state run sources can be more censored. However, this may not last long. For example, looking at the failed coup attempt in 2016, the opposition military stormed the CNN building, stormed the Turkish newspaper Kurriyet Gazetesi, and forced a reporter for the state broadcaster TRT to read a written statement at gunpoint while on air. In this situation, I believe the media, though still running, would be severely compromised. 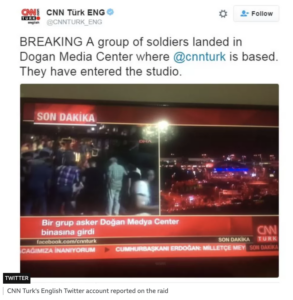 The next best option would be to turn to social media including Facebook, Twitter, and Tiktok. These social media platforms have become a “dirty” form of journalism where quick tweets and videos can relay breaking news and headline stories that are able to reach a wider audience. This photo is someone live streaming on Facebook the empty news room being shown on their television. 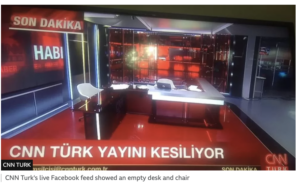 With that, I would be able to find quick snip-bits of information about the state of the country and because everyone, in their own way, can become a journalist, it’ll be much harder for the military to shutdown the entire platform. Tiktok, as well, has become an activist/citizen’s platform spreading content through short 30 secs videos or 3-minute videos. I believe a coup today would have to turn towards social media over TV and radio.

Why Did Political System Change in Turkey?