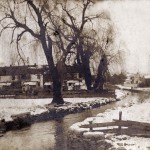 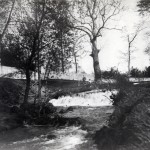 Throughout its existence, LeTort Park has been used for all sorts of recreational activities such as fishing, biking, running, and hiking. In 1943, Samuel C. Hertzler and his wife donated the future parkland to the Carlisle Kiwanis Club to create a playground and recreation space for the residents of Carlisle.[1] They donated this land under the condition that if the Kiwanis Club ceases to exist then the land will go back to the Hertzlers or to Carlisle to continue to be used as a town playground.[2] From spring of 1967 to fall of 1969, the Civil Development Project Garden Club Federation of Pennsylvania were involved with a LeTort beautification project which meant to make the park more accessible, add lights to the soft ball field, and improve the soft ball field.[3] On June 14, 1979, the Borough of Carlisle purchased 6.189 acres of land for $25,000 from the Eastern Real Estate Company to complete LeTort Park (minus the trail).[4] This purchase was meant to ensure the park would be a permanent recreation space in Carlisle.[5] The playground was added to the park in 1993.[6] The children of Carlisle were asked by the playground designers what features they wanted to have in a playground and families in Carlisle raised money to fund the building of the playground.[7] Currently, LeTort Park is protected under the Land and Water Conservation Fund Act, meaning that without the Secretary of the Interior’s approval, the land cannot be anything except a public park.[8] One of the reasons LeTort is valued so much is because of its combination of natural scenery such as the stream and running trails and active recreation such as the playground and baseball diamond. This combination supports the thoughts of both playground advocates and park planners in the nineteenth and twentieth centuries. Many historical playground advocates strongly agreed that organized team sports would benefit children socially.[9] Additionally, many park and urban planners realized the benefits that immersing oneself in nature had for an individual. Children and adults alike at LeTort can play or watch team sports on the baseball diamond or experience nature by going for hikes and runs along the trail.