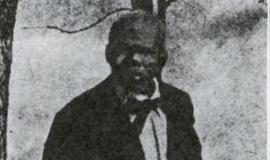 John Butcher was born a slave in Virginia in 1832. His wife, Charlotte, was also born in Virginia, eleven years after her husband and the couple married in 1862. In the same year their first son, William, was born. Not much is known about Butcher’s life as a slave however he had a curious encounter reported on by the Evening Sentinel in Carlisle in May of 1890. The newspaper wrote “A slave owner and his former slave once owned by him met on a Carlisle Street on Wednesday afternoon after twenty-five years separation and enjoyed the unexpected meeting very much. The colored man was John Butcher.”[1] The man at the meeting and Butcher’s former owner was Joseph Barton, who owned both John and Charlotte in Frederick County, Virginia.

It is still unknown when the Butchers came to Carlisle but the time frame is “sometime between the Emancipation and the Battle of Gettysburg”, a time period where many African Americans moved into “the lower Cumberland Valley.”[2] When they first arrived in Carlisle the Butchers “lived for some time in the countryside before moving their family into town.”[3]  In town Butcher became “known for this ‘thrift and industry,’ started supporting his family by selling large quantities of neat’s foot oil, an extract made from the shin bones of cattle.”[4] Along with his oil business Butcher was a laborer for George Hench for twenty-five years. Both of these work opportunities allowed for Butcher to begin collecting a number of properties.

The Butchers lived in “Carlisle’s third ward, the town’s ‘industrial center’ and home to a majority of Carlisle’s African American citizens.”[5] After five years in Carlisle, in 1868, Butcher purchased his first of multiple properties, a space on Walnut Street. Nine years later “Mary Hench, George Hench’s executrix, ‘granted and conveyed’ to John Butcher a lot on Chestnut Alley.”[6] This lot would go on to become the Butcher Tot Lot. In 1890 “The Sentinel reported ‘John Butcher is building 2 new brick houses on his property on Chapel Alley.” The properties on Chestnut Alley and Chapel Alley were used to rent to tenants while the Walnut Street property was the Butcher family home. The Butchers lived in that house for forty-nine years and it was described in 1910 as “being situated upon one of the nicest residence streets in town and is a model of comfort to his declining years.” [7] For more information on the Butcher Family, click here.