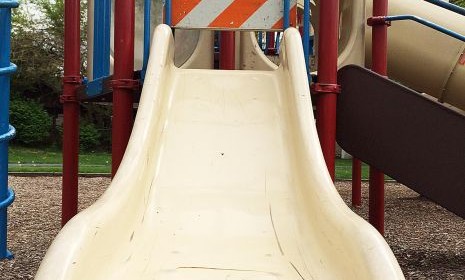 Heberlig-Palmer was created largely as a means to increase community security, by allotting its land as a safe haven for community recreation. However, this does not mean that the site was exempt from previous acts of vandalism, loitering, and drugs after its establishment. Efforts continue to be made to address such ongoing areas of conflict, including the recent installation of a security camera and lights on June 26, 2015 [1].  These additions were made possible by the Carlisle Westside Neighbors, who raised money for security cameras that stream live, which are available to borough officials and the Carlisle Police Department. The lights function as a preventive measure in deterring people whose criminal activity has previously gone undetected in the darkness of night.

Vandalism is perhaps the most frequent violation that has occurred on Heberlig-Palmer’s grounds. Multiple acts of vandalism, resulting in a total of over $2,000 in damage, occurred during the Spring of 2014. Police reports stated that graffiti was found on the picnic tables and one of the slides was fractured in several places. These occurrences raised not only a concern of criminal activity or damage done to the aesthetic quality of the park, but also a threat to the well-being of the children who play on these consequently unsafe slides.

However, with these security measures taken, Carlisle Westside Neighbors takes a step toward creating a safer and more inviting place for recreational use.