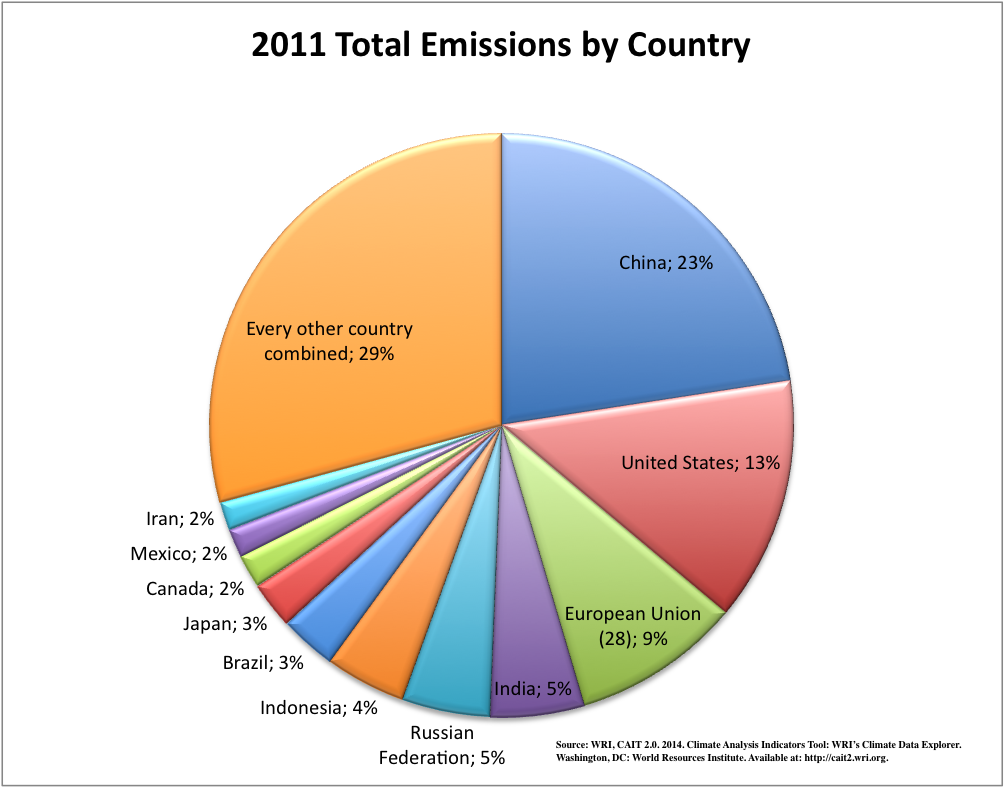 The Ad Hoc Working Group on the Durban Platform for Enhanced Action (ADP) was charged with figuring out how to set up a new protocol in 2015, which will come into effect in 2020 (UNFCCC, 2012). The UNFCCC (2012) asked the ADP to work to find ways to close the ambition gap between pledged emission reductions and the level of reductions necessary to stay below 2 degree Celsius warming. Some countries are voluntarily stepping up and agreeing to emissions reductions (such as Nationally Appropriate Mitigation Actions (NAMA) in developing nations). However, the world is not close to being on track to stay below the 2-degree limit (UNFCCC, 2012) agreed to in the Copenhagen Accord (UNFCCC, 2010). The best way to get the world on track to reducing the impacts of climate change is through top down agreements, which reduce greenhouse gas (GHG) emissions. A top down agreement will be the most effective given the current situation because meaningful emissions reductions can be realized in a small window of time, the biggest polluters would be legally bound to reductions, and an agreement can be forged to minimize the worst impacts of climate change.

If a bottom up approach were taken, emissions reductions would not be realized quickly enough to have an impact. Voluntary pledges will not work because they allow too much flexibility on a national level. Every country is ultimately self-interested and will obey the rules of the prisoners dilemma unless they are able to coerce others into an agreement. Under this circumstance, only those countries that can benefit from emissions reductions (politically or economically) will cut GHG emissions. Emissions cuts might take place under this scenario, but they will either be “low hanging fruit” emissions cuts, because they are economically viable, or other reductions that make sense for a country to take on regardless of the way other countries act. For example the US, under George W. Bush, pledged to reduce carbon dioxide emissions per dollar gross domestic product (GDP) (Center for Climate and Energy Solutions, 2002). Other countries could make similar insignificant commitments where emissions could still increase when they have pledged to reduce under some parameter. A bottom up approach does not bind countries together to make a difference. Other forcings must occur to get countries to join for emission reductions.
Bodansky (2012) argues that a “multi-track approach” is best because it will give countries flexibility, but will still hold countries accountable and allow for real commitments. This method does provide the most politically feasible route forward and would lead to relatively quick short-term emissions reduction benefits. However, this path could disintegrate as parties jockey for positions that require less commitment. For example, India has proposed that countries should not have to mitigate emissions until they reach US$20,000 GDP per capita (Bernauer and others, 2014). According to the World Bank (2014) India currently has a GDP per capita of US$1,499 averaged over 2009-2013, allowing them to avoid responsibility for the foreseeable future. Yet, India is responsible for approximately 5% of the world’s emissions (World Resource Institute, 2011) and is thus needed in climate negotiations as emissions continue to grow (Baumert, 2005). Under a multi-track approach, countries can easily evade ambitious GHG reduction plans.

A top down approach allows for quick and decisive action. The most important piece is for the biggest emitters to come together to make a deal, because small nations do not matter in terms of emissions and mitigation. About 70% of the worlds emissions belong to (in descending order) China, United States, European Union (28), India, Russia, Indonesia, Brazil, Japan, Canada, Mexico and Iran (WRI, 2011). These countries must come together and pave a binding path forward that would limit warming globally. This plan would need to take the form of a legally binding Kyoto like agreement (Bodansky, 2012) from the biggest GHG emitters and could later be expanded to include future emerging emitters. A top down agreement is imperative to ensure that the necessary (largest emitting) parties sign on to reach meaningful cuts to avoid worst-case scenarios from warming. Fast and decisive action is needed to close the ambition gap between pledges and the reductions needed to keep the world below 2 degrees Celsius warming (UNFCCC, 2012), which can only be achieved through legally binding and enforced agreements amongst the biggest emitters.
The bottom up will provide insignificant short terms emissions reductions, which will not be enough to stay below 2 degrees Celsius. Energy and focus should not be put towards achieving a bottom up strategy because that is not where meaningful change is going to occur. Only the biggest emitters need to focus on establishing drastic reductions immediately under a legally binding framework. There is no time to wait to include every country. The biggest emitters must take decisive top down action to minimize warming immediately.