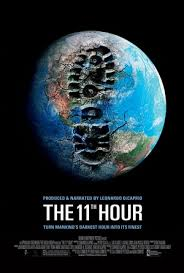 This semester I am taking a course called Sustainability: Social Justice and Human Rights. Each week we have to write an journal entry and I wanted to share some of my entry from the first week of class. We watched the film The Eleventh Hour in which Leonardo DiCaprio had a narrating role.

The first week of class we watched the film The Eleventh Hour, several main themes of this film struck my attention. First I want to mention the reappearing narrative of Leonardo DiCaprio. A few months ago I would have had NO IDEA that he was an environmentalist. I took part in the Climate Change Mosaic last semester where a group of 14 students and I went to COP20 (The Twentieth Conference of the Parties) in Lima, Peru. I first learned that Leo was an environmentalist a month or so prior to the conference, when he announced he would be attending the COP (Conference of the Parties). He never ended up attending the COP which is an entirely different conversation, but maybe if he had gone it would have done some good in terms of climate change awareness. Perhaps climate change needs a celebrity face to help engage the public and bridge the education gap. I envision something along the idea of the “Got Milk?” commercials that use celebrity faces to publicize their product.

Several ideas mentioned in the film resonated with me, particularly the idea of “current” sunlight versus “ancient” sunlight. These are terms that I have never heard before and I loved that they were brought up. When the world population was less than one billion people we could live off of completely current sunlight and on the other hand, with the exponential population growth we are experiencing today, we rely heavily on ancient sunlight. In general with this and many other environmental concerns, I always believe that a population limit would do our earth some good.

I am a supporter of the one child limit that China imposed for a period of time. The larger the population, the more stress on necessary resources. Think about the amount of clothes a single person goes through in their entire lifetime. All the materials that go into making them; millions of acres that are used to grow cotton to make a simple white t-shirt, shipping, fueling the factories clothes are actually made in. I think about the amount of food I consume daily… Personally, I don’t even eat that many processed foods and I don’t eat meat. I am one person; I consider myself to be a fairly sustainably minded person yet my carbon footprint is HUGE. “The UNICEF estimates that an average of 353,000 babies are born each day around the world.” (http://www.theworldcounts.com/stories/How-Many-Babies-Are-Born-Each-Day)

This is disgusting and quite frankly I believe that this rate needs to slow down and it needs to slow down as soon as possible. Think about how many resources are needed to supply 353,000 people… Society cannot just keep growing at this exponential rate and assume there is going to be infinity of this “ancient sunlight”. The Eleventh Hour also mentions that humans are the only species to recognize the future and know that there is a future. You’d think maybe we would treasure this ability and plan better for the future.”