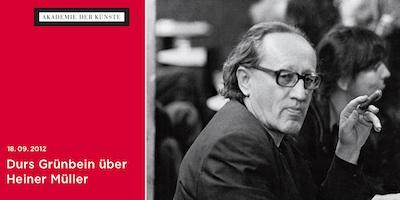 On Sept. 18, 2012, Dr. Janine Ludwig, director of the Dickinson-in-Bremen program, had a public conversation with the renowned German poet, Durs Grünbein.

At the Academy of the Arts in Berlin, the two discussed works of Heiner Müller, a theater director, essayist, author, poet, dramaturge, and former director of the Academy of Arts.  Both Ludwig and Grünbein have worked extensively with Müller’s literary estate and used examples from his work to delve into Müller’s late poetics.