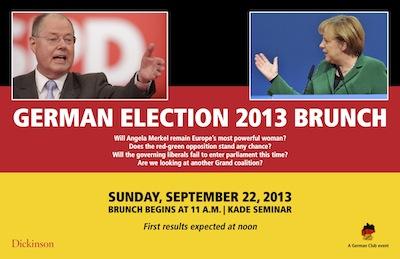 In our globalized world, it’s not only American politics that have an effect on us. Europe influences political events across the world and Germany plays an important role within this system.  But who is in charge of German politics?

On Sunday, September 22nd, the German Club hosted a Brunch at the Kade House to follow the 2013 German election. With the first results being expected around 12 noon, club members discussed the candidates, the political parties, and how the election process works. It was a great way to experience the German politics “live” while enjoying some coffee and home-made German cake!

For the event, students of the German club prepared the baked goods themselves! There was plenty to do, from peeling apples, to preparing batter. All of the students had a great time baking, and when the cake was ready it tasted delicious! Take a look at some photos from the event.