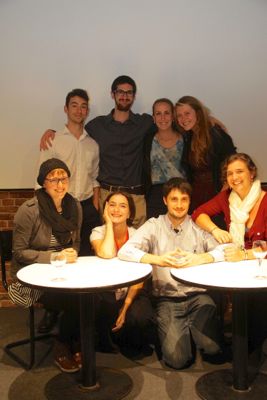 Seven Dickinson students on their year abroad at the University of Bremen had a unique opportunity to experience German culture and recent history from an exceptional angle. On a five-day excursion to Berlin, they explored historical and cultural sites such as the Brandenburg Gate, the Reichstag, the former Stasi headquarters, and the Berlin Philharmonic Orchestra. They also were involved in a three-day transatlantic conference on one of the most influential cultural figures of 20th century Germany: the playwright Heiner Müller. The conference was co-organized by the Academic Director of the William G. and Elke Durden Bremen Program, Dr. Janine Ludwig, on behalf of the International Heiner Müller Society.

At this conference, the Dickinson students from different fields of study had the chance to hear and personally interact with many important intellectual figures from German (and American) theater, culture, and politics.