Recently, I read a news article on the young Arab perspective on Democracy. Below I will detail and summarize what I have learned.

In a comprehensive survey conducted by ASDA BCW Arab Youth Survey, the majority of young Arabs have come to the consensus that democracy will not work in the region. This was seen as 64%, nearly 2/3, of young Arabs agree that democracy will not work. In sub-regions, the Levant had the highest disapproval of democracy at 72%. Much of the sentiment is due to instability in the region as countries such as Palestine, Syria, and Lebanon are all undergoing their own specific crisis’. The reason for the poor outlook may be due to the lack of true stability as many democracies in the region have failed. Countries such as Egypt, Tunisia, and Iraq have all had failed democratic governments which end up getting replaced with more Authoritarian regimes. 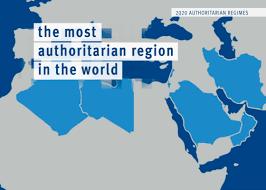 Another reason that for the lack of trust in democracy could be the history of US involvement in the region. Endless regime change wars and public support for Israel have soured the perspective of the US in the region. This sentiment is demonstrated by the gap in support for China over the US. 78% of participants said that China was a stronger ally compared to only 63% in favor of the US.

Overall, the main agreement between all surveyed was the need for stability to ensure a better future, especially in the Levant region. I will end this post with a quote from the article. “They want more freedoms, but they prioritise stability. They seek reform but want to preserve their culture and traditions. They are optimistic and self-reliant, believing their best days lie ahead, but their expectations are high.”