The authoritarian practices of the Egyptian government are pervasive in the day to day life of Egyptian civilians. For outsiders, such practices are amplified and the Conference of the Parties of the UNFCCC or COP27 is no exception. Held at Sharm el-Sheikh, Egypt the conference on climate change has highlighted the authoritarian practices that are present in modern day Egypt, much to the dismay of the delegates. As reported by The Guardian, any dissent is sought to be thwarted by the Egyptian police. President Sisi of Egypt has amassed a “small army of police, security guards and state Mukhabarat agents found throughout Sharm” (Milman 2022). The constant presence of law enforcement has become unbearable to some. Activists have had to bear most of the burden of the law enforcement as they have been consistently followed and threatened for their acts of public dissent. Additionally, the Egyptian government has attempted to thwart press conferences that reference jailed activist Alaa Abd el-Fattah, a British-Egyptian dual national. Furthermore, the official COP27 app has monitoring software embedded in it that requires the user to submit information to the Egyptian Government and monitors the users location and emails as well. Such a stark police presence has left a cloud of doubt and oppression over the conference.  Due to the crackdown, activists have been strictly confined or squashed out all together (Milman 2022).

Furthermore, the Egyptian governments control of the activists has stretched even further to require registration of demonstrations and has even designated specific protesting zones far from government negotiating areas as reported by CBC. Such constraints on civil society have detracted from the importance of the event itself and only highlighted issues within Egypt itself. These crackdowns at the COP are drastically different from prior COP’s where civilian demonstrations are routine and to be expected. . Sadly, such constraints on civil society are to be expected in a near police state such as Egypt (Bernstein 2022).  Not only do the constraints on activism diminish the importance of the COP 27, but it continues to highlight Egypt’s poor record of human rights within the country. Such denials of the rights of activists and civil society limits the impact of the COP27 itself, especially in a region that has been so affected and will continue to be affected by climate change. 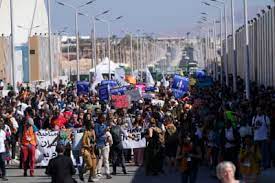