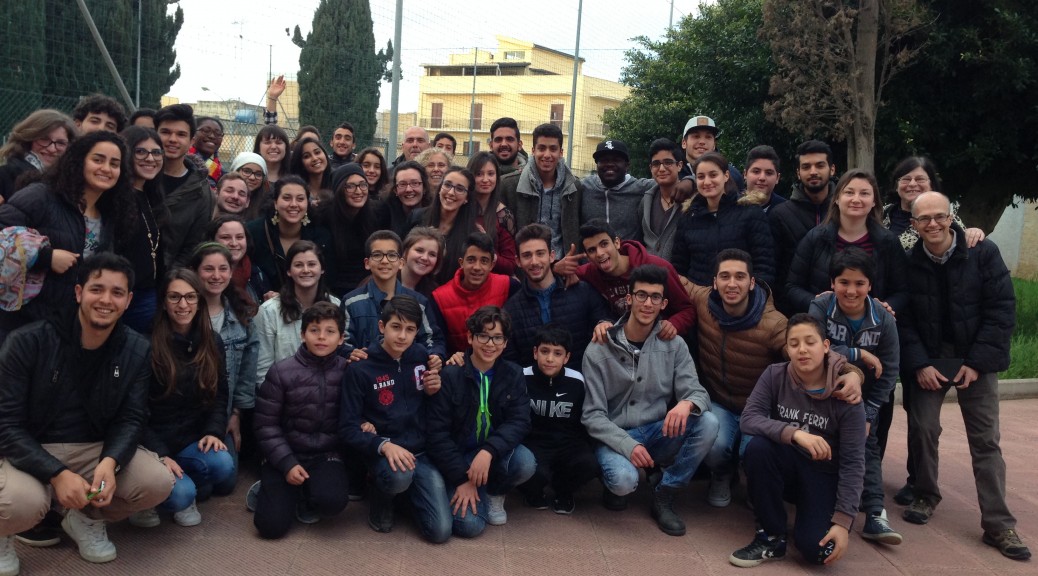 On Monday morning March 7th, we left Palermo early for a seaside town called Mazara del Vallo which has a large Tunisian population that represents the largest Arab community in Italy. Before our interviews with members of San Vito Onlus, an organization which is dedicated to helping immigrants in Mazara and has ties to the Catholic church (http://www.fondazionesanvito.com/), we split up into groups to have lunch and explore parts of Mazara.  As we were walking down the main street, it became obvious from the looks we were getting that Mazara is not a major tourist destination, at least not in early March.  Jess and I were searching for a place to eat, when a man stopped us on the street and asked us if we were tourists.  We told him that we were and that we were looking for a place to have lunch.  He seemed very happy to recommend Caffe Med which was close to the sea and allowed us to walk around the beach before meeting up with the group.  Looking out at the Mediterranean and being able to touch the sea with my own hands and feet was a very surreal feeling.  We spent so much time in the classroom reading about the journeys and the sacrifices that people make in order to cross this body of water and now to see it in front of us, giving no indication of the thousands of lives that have been lost within it. As we began our interview with the members of Fondazione San Vito Onlus, we learned that the total population of Mazara is about 54,000 with a Tunisian population of about 3,000 (although they believe that there are closer to 6,000 there).  In the 1970’s, many men came over from Tunisia when there was a shortage of fishermen in Mazara which is the largest fishing port in Italy as well as one of the largest in the Mediterranean.  Because fishing is crucial to the economy here, the Tunisian immigrants were welcomed in order to support the industry.  Since the 1970’s, many Tunisian families have reunited and settled in Mazara as a result of chain and family migration patterns.  Francesco, a journalist who works with the foundation, described Tunisia and Mazara as sharing the sea because they both fish there.  Because of this, one might think that the Tunisians and Mazarians would be integrated, but Francesco described the relationship between the Tunisians and Mazarians like that of a married couple that  lives and exists in the same house, but does not communicate with one another.  He said that the only exception to this is on the fishing boats and at the foundation, where they interact and work together.

One important aspect of this organization is its work with women.  They talked about how the Tunisian women do not have many opportunities outside the foundation compared to men.  There was an initiative that ended in 2015 called “The New Italian Project” which taught 15 women and 10 men entrepreneurial skills and gave them work experience (http://www.fondazionesanvito.com/2015/09/30/progetto-nuovi-italiani ).  The men worked on farms which had been confiscated from the mafia and the women worked in bakeries making Tunisian and Sicilian pastries.  Two of these women, Suad and Sallua, were at the Foundation while we were there and said that they enjoyed the experience because they were able to enjoy the company of other women.  One woman who works at the foundation, Maria, said that a lot of their integration is focused on women because women act as the mediators between the family and the outside world, through activities such as picking their children up from school or shopping for the household.  She also said that many of these women are not aware of the rights that they have.  For instance, widows may not realize that they have access to pensions.  The foundation tries to raise awareness of their rights and also empowers the women with whom they interact.

Another important area of the Foundation’s work focuses on children of Tunisian origin.  At the end of our time at the foundation, we were told that there was a group of students aged 11-18 who had been waiting for 2 hours to talk with us while we were interviewing the others.  As soon as they opened the doors, more than 30 students came into the room, excitedly chatting and took a seat.  One girl explained that they were really excited to talk to us because we were from America and they could practice their English.  They were all first or second generation Tunisian immigrants and the girl explained that after school they have a homework help session at the foundation and then they have other activities such as sports or games.  From some conversations with them, it did not seem like they were friends with many Mazarian students, but their eagerness to talk with us made it clear that they wanted to connect with other students despite backgrounds.  We ended our time there with a dance party, which, although there wasn’t a serious language barrier for any of us and we were able to communicate, proved once again that dance (as well as music, theater, etc) can transcend cultures.  The students were eager to teach us new dances from Tunisia as well as learn some of our dances.

I think that we all found our time at the foundation to be very positive.  It was wonderful to hear from the members of the foundation about the initiatives and the programs that they have created for immigrants in Mazara, but to then actually meet the students and see the supportive and inviting group that the foundation has created  was especially impactful.

Foundation’s interview with Professor Marini-Maio regarding our mosaic:

Testimony from a member Tunisian member of the Foundation: