Russian poet and essayist Alexei Tsvetkov visited Dickinson College as a guest poet for Semana Poetica VII. During his poetry readings,  Alexei presented poems from his recent book “Imena Liubvi” (Names of Love), 2007. Watch the episode from the closing readings:

Currently living in New York City, Alexei Tsvetkov came to Dickinson not only to present his poetry but also to visit his former place of work – he taught Russian Literature at the Russian Department in the 1980’s. 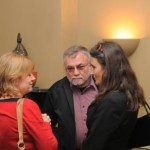 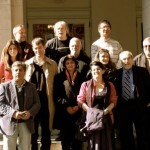 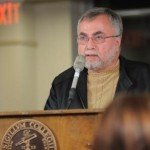 Alexei, well known as an essayist, dedicated one of his essays to his visit, where he reflects on his experiences at Dickinson College:

“All the days of stay in Carlisle I was trying to impose this on the past, even sought out, though with difficulty, the house where once lived with an American wife and a charity dog, mongrel, Sharik. I-present walking on the heels of a then, but never managed to take the trail. It seems that nostalgia has a shelf life, it is eroding. Nostalgia, I tell you, is not the one that was in our time…”