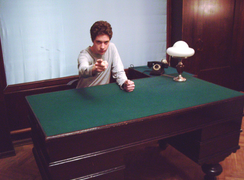 As part of the Dickinson program, seven Dickinsonians attended the first public debates over Stalin’s legacy, organized by the Moscow News, the expat Russian Newspaper.

Phil Kiffer ’11 writes about how this experience has helped him to better understand Russian life and culture:

“It was interesting to attend and listen to because it’s a debate we could never have in the United States because opinion is completely one-sided. However, it’s important to remember that Stalin was the head of government when the Soviet Union underwent industrialization, won WWII, and became a global superpower. Thus, a significant number of Russians will always view him a symbol of national pride. On the other hand, he undoubtedly purged a significant numbers from the Russian population and for that reason he will always be detested by a great number of Russians. Those two points are the basic foundation for a conflict that has been tormenting Russian society since the Khrushchev era and continues to be an agent of difference even in the highest echelons of government. Medvedev and Putin seem to have polar opposite views on the matter of Stalin and potential rehabilitation. There were a diverse number of participants including an Arch Priest of the Russian Orthodox Church, a conservative political commentator, the historian of Memorial (a human rights organization in Moscow), and oddly the head of the Socialist party of England and Wales. I agreed and disagreed with all speakers on certain levels. Although, the socialist party representative was the most bizarre as he struggled to condemn Stalin through a Marxist perspective of history (all history is the history of class conflict). This basically led to a claim that Stalin was an agent working against communism and revolution in Russia and he strived to destroy any gains of the revolution during his rule. Now, Stalin was not a good guy, but the last thing our already skewed perspective of the history of the Stalin era needs is baseless politically-biased conspiracy theories. Overall, it was a thought provoking experience and only the first in a series of planned debates.”

As you can see in the pictures, this was not the first time Dickinsonians in Moscow have explored the different aspects of Soviet-era reflections in Russian society.

In the Soviet Past Sculpture Park Cara Elder ’11 poses near the damaged and defaced monument to Stalin, to which someone brought flowers.