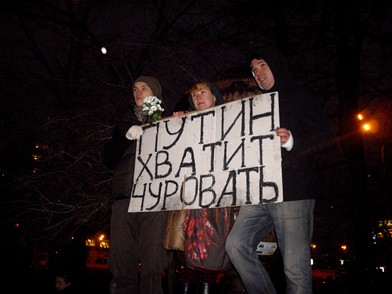 Alex North ’13 describes her experiences at a protest during her semester on the Dickinson-in-Moscow program:

On December 10th, 2011, I braved the cold and hordes of police to attend the massive protest in Moscow against the falsification of the Duma elections: “The Meeting for Honest Elections” (Митинг за Честные Выборы). The number of people who poured into Bolotnaya Square has been debated. The Kremlin modestly estimates a crowd of 30,000 while protesters claim the turnout was twice that number. Even according to the most conservative numbers, the Meeting still takes its place in Russian history as the country’s largest public demonstration since the fall of the Soviet Union.

I was initially incredibly nervous to attend. Spontaneous protests over the election fraud had broken out across Moscow in prior weeks and ended with police violence. I even received an e-mail from the U.S. Consulate warning Americans abroad to steer clear of any protests. Indeed, as I approached the Meeting that Saturday afternoon immediately noticeable were the long lines of stern-looking policemen and armored trucks. Though upon joining the massive crowd and being handed a white ribbon denouncing United Russia as a “Party of Crooks and Thieves,” my fears were eased. The energy of the protesters was not at all one of mob violence, rather of rightful and well-articulated anger. And despite the ominous police presence, not a single police altercation was reported. Interactions on the square itself were aimiable. Many signs and banners being waved employed satire and puns, and everyone joined together to sing Viktor Tsoi’s “Перемен” (“Change”) and to chant “Россия без Путина!” (“Russia without Putin!”).

As a foreign onlooker, I was incredibly moved and impressed. The election fraud was so openly and shamelessly corrupt, a kind of apex of the political corruption that has plagued Russia in the last two decades. But for the first time under Putin, public outrage overpowered the Kremlin’s rigid control over public discourse. Russia is not my country and this is not my fight, but chanting in the cold alongside tens of thousands of protesters I felt some of that revolutionary spirit still memorialized all over the streets of Moscow.

A pun: “Putin, enough Churov-ing!” The verb these protesters use, churovat’, sounds like shurovat’ (to poke at, incite, stir). Churov is the head of the Central Election Commission, and one of the demands of protesters is that he be fired.