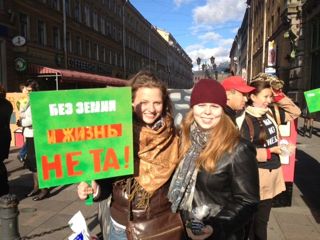 Russian major Kirsten Brents ’14 tells about her recent weekend trip to the Hermitage museum in St. Petersburg and other adventures around Russia’s northern capital:

“On our last day in Saint Petersburg, we pretty much had a “Hermitage in a nutshell” tour. At first I was reluctant to go back to the Hermitage a second time (I had been earlier this summer) but I’m really glad I did. The good thing about going to the Hermitage a second time is that you can see only the things you like and not feel bad about skipping a lot of exhibits. It was also really cool being able to explain some of the exhibits to my friends. The uniforms and military history quickly became my favorite exhibit. I could have spent hours in that one room alone.
I spent the rest of the day with Chase and Petya walking around the artillery museum and all up and down Nevsky Prospekt, checking out all the places I wanted to see but didn’t get to last summer. We found a great Ukrainian restaurant called Odessa Mama. The vareniki they cooked were really good, and were at a great price for those on a student budget. We understood all the jokes they had on the placemats, so that was very rewarding, since we’ve been working so hard at understanding this language. We liked the place so much that we stayed for two pots of tea, which were also very good. That’s one thing I’m beginning to notice – since coming to Russia, I’ve become a tea snob.
Petya, Chase and I also went to a tiny art district called Pushkinskaya 10. They have a cool club called Fish Fabrique and a ton of nonconformist art galleries. Between Fish Fabrique and the main exhibit buildings there is a tunnel with graffiti on it, done by passers-by who wished to share song lyrics, write messages to people they love, and pass on other pearls of wisdom. We must have stayed half an hour or more reading the writing in that tunnel and picking up some new vocab as well. It was a lot of fun.
Then, all too soon, it was time to head back to Moscow. I already have a lot of great memories just from my first two visits to St. Petersburg and I can’t wait to see what adventures come about the next time.” 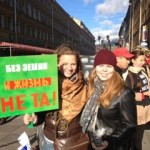 While walking around St. Petersburg, Kirsten Brents ’14 ran into people peacefully protesting the expansion of apartments around the St. Petersburg area 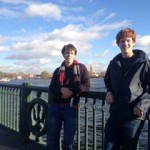 Chase Philpot ’14 and Peter Sisson ’14 by the Neva River