This past weekend Dickinson-in-Moscow students (and two students from Holy Cross College) traveled to Volgograd, formerly named Stalingrad. As they learned the history of Volgograd from the 16th century to modern days, they paid particularly attention to the history behind the Battle of Stalingrad.
As Peter Sisson’14 recounts, “We went to the Panorama and Museum of the Battle of Stalingrad. Our tour guide Alexandra was very enthusiastic and very knowledgeable. On the top floor of the museum there was a huge panorama depicting all of the various stages of the battle, from the initial German attack to the Soviet counters attack and victory. The panorama highlighted the acts of heroism by the soviet army soldiers, such as how one soldier crawled through the fire and connected a telegraph line with his teeth.”
The best part of the trip for Kirsten Brents’14 was going to Mamaev Hill and seeing the statue of the Motherland. “It was absolutely breathtaking,” she says, “When you are walking up there you realize how big the statue is and how much the victory of Stalingrad means to the Russian people. I also found it interesting to watch the Honor Guard do its regular drill and ceremony. Guarding the memorials at Mamaev Hill is very serious and honorable job for these young Russian soldiers.” 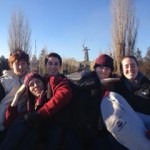 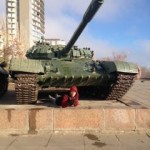 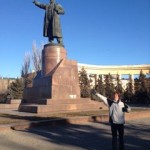