Over winter break, juniors Chase Philpot and Peter Sisson left Moscow, where they had been studying on the Dickinson-in-Moscow program for the fall semester, and headed towards Lake Baikal-the world’s largest freshwater lake, in the heart of Siberia.

Of their trip, Chase writes:

“I decided to trek eastward on the Siberian Railroad with my buddy Peter, going three days by train to our first destination Irkutsk, a small city not far from the Mongolian border famous for its prime location near Lake Baikal.  After a week of exploration in negative 40 Celsius weather, getting lost in Siberian forests, and riding on a dog sleigh (those last two are unconnected), we travelled further to Vladivostok, Russia’s largest eastern port. After snowboarding and walking out onto the frozen Pacific Ocean, Peter and I split up and I took my time returning to Moscow by train stopping in Blagoveshensk, Khabarovsk, Irkutsk, and Novosibirsk.  I recommend the Siberian Railroad experience to all! It is not as scary as it sounds! My trip was made most memorable because I used the “couchsurfing” website. Instead of staying in hostels, I found complete strangers in each city willing to take me in for a few days.  Each experience was unique and now I have good friends all over Russia.”

Peter added that “on our trip, I came to realize that Russians are good, kind-hearted, and open people. They are willing to share their opinions and experiences with you and will listen to you share yours. The stereotype of the Russian people could not be further from the truth. My best memories from my semester abroad came from this trip.”

Peter returned to Dickinson for the spring semester; Chase will spend the rest of the 2012-2013 academic year in Moscow. 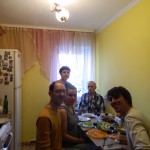 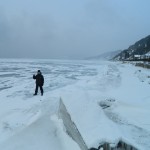 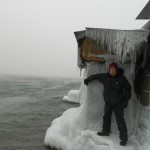