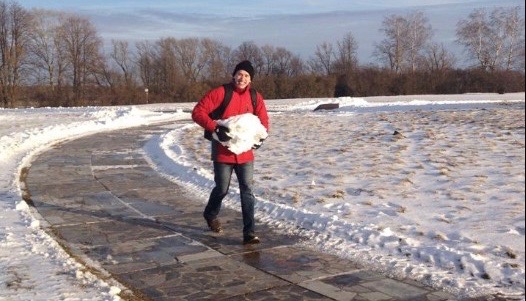 Ellis Johnson ’18 (Russian and Physics) was awarded a scholarship for summer 2016 to study intensive Russian language in Narva, Estonia. Narva is the third largest city in Estonia. It is home to just under 60,000 people and is located at the easternmost point of Estonia, a few miles from the Russian border.

This past summer I had the pleasure of spending 8 weeks studying Russian in Narva, Estonia. The intensive language program was sponsored by ProjectGO, which sent around 45 cadets including myself to the small Baltic city. While we weren’t able to study in Russia due to diplomatic tensions, Narva is just about as close as you can get: the border is quite literally “a stone’s throw away.” Aside from its obvious proximity to the Motherland, Narva is also inhabited by a Russian-speaking majority and shares the classic Soviet-style architecture that can be seen throughout the post-Soviet world.

For almost 2 months the easternmost city in Estonia became my home. Days included regular 4-5 hour classes studying at the University of Tartu with some of the most renowned Russian professors in the field. Afternoons often meant excursions to local sights, where we would meet a tour guide and be given lectures entirely in Russian. These lectures, of course, varied in subject matter and intrigue. As you might imagine, we saw our fair share of museums and monuments. However, we also spent a day nearly a mile underground, learning about modern Estonian mining practices. Other days, we were instructed to simply explore Narva on our own, testing our language skills through seemingly menial tasks that consistently proved harder than anticipated. Getting a haircut, for example, became a major milestone and personal triumph. Weekends also alternated between longer trips to see other cities in Estonia or free time to explore the region.

While at first it was a bit hard to adjust to life in Narva, the town certainly grew on me. The bland buildings and distinct lack of smiles were anything but welcoming. Once settled, however, the ever shrinking city provided a swath of unique experiences and cultural interactions. Daily trips to the gym were met with a new group of Narvan friends eager to share their Soviet lifting knowledge. Other trips to the beach, which was just 20 minutes away, were spent teaching Frisbee to eager locals who had never seen the flying disk. But perhaps, most enjoyable, was our time at the local child daycare. There we would attempt to match linguistic prowess with the newest generation of Russian-speaking Estonians while we taught them American classics such as “freeze tag” and “red light, green light.”

As my time in Narva drew to a close, I took a final series of exit exams and said goodbye to the eight-week-long super friendships that only a Russian language intensive program could have forged. Nowadays, my closest four friends and I find time during week to talk and exchange more stories about our time abroad. (I am here in Russia, one studies in Bishkek, Kyrgyzstan, one in Scotland, and one back stateside.) Our inside jokes about Narva find their way into conversation regularly, and it’s odd to think we didn’t even know each other last year.

While I currently have no plans to return to Narva, Estonia, I understand the value of my experiences in the small gray city and I am immensely happy for the time I spent living there.