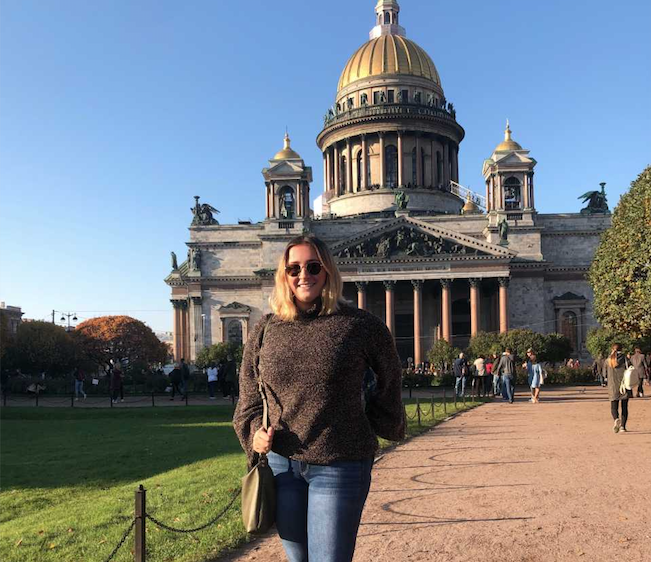 Annie Mothershead ’20 is a junior Russian major who is currently studying abroad on the Dickinson-in-Moscow program. Before beginning at Dickinson, Annie participated in a Russian summer immersion program in Moldova, so she has had experience living and studying abroad. After just over a month in Moscow, here’s what she says about her time as a student in Russia’s biggest city:

What courses are you taking?

I’m taking Russian Grammar, Russian Media, Russian Foreign Policy, a class called Практика речи which is focused on conversational Russian, Russia Today which covers everything leading up to the current state of the Russian Federation, and we also have a few supplemental courses in intensive writing and phonetics.

I have found it interesting how little Russians drink plain water. I buy bottles of water every single day but I have never seen my host mom drink anything other than tea or coffee. At restaurants you don’t automatically get served water like in America, instead you have to order it by the bottle. I was also very impressed by how clean the city of Moscow is. The current mayor has apparently made the city extremely clean and green in the last few years. It is beautiful!

My host mom is the sweetest. She cooks the best food and loves to talk over a cup of tea. She has hosted many Dickinson students in the past and has traveled all over the world!

She told me a story about how, around 1946 after the end of the war, there was a time of hunger in Russia. She described how she was at the dacha with her siblings and parents and they had a really naughty cat. Apparently, the neighboring family had a more privileged lifestyle with more food than my host’s family. One day they were sitting outside and they noticed their bad cat was over at the neighbor’s house. The cat stole a giant sausage from the neighbors and took it back to be cooked up by my host’s family. She said the cat got the first piece of the sausage.

What has been your favorite experience so far?

My favorite experience thus far has been spending time at my host’s dacha. It is in a beautiful wooded area about an hour and a half by train from Moscow. My first time there I met all of her extended family as well as the neighbors and friends that joined us for dinner. We spent time playing games and eating delicious food. They collect mushrooms from their woods so we had a delicious meal with sautéed mushrooms! It was really nice seeing the surrounding areas of Moscow and I felt totally included into their family.

What are you looking forward to later in the semester?

I am really looking forward to looking back on how much progress I have made in my language throughout the semester. I feel like my grammar is greatly improving and the immersion is definitely helping with my confidence in Russian.