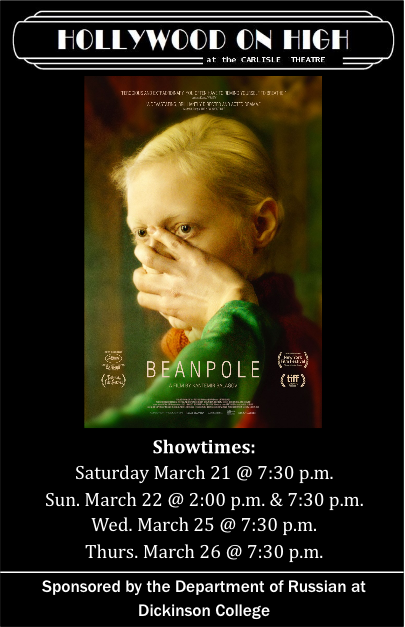 Russia’s official entry to the Best Foreign Picture category of the 2020 Academy Awards is coming to the Carlisle Theatre in late March.

1945, Leningrad. World War II has devastated the city, demolishing its buildings and leaving its citizens in tatters, physically and mentally. Although the siege—one of the worst in history—is finally over, life and death continue their battle in the wreckage that remains. Two young women, Iya and Masha, search for meaning and hope in the struggle to rebuild their lives among the ruins.

Joe Morgenstern of the Wall Street Journal writes that Beanpole “is an improbably thrilling work of art by virtue of its physical beauty and its relentless intensity of feeling about people–not only Iya and Masha–who would prefer in their heart of shattered hearts–to feel nothing.” Manohla Dargis of the New York Times says that Beanpole is a “brilliantly told, deeply moving story about love–in all its manifestations, perversity and obstinacy.”

Sponsored by the Department of Russian at Dickinson College.