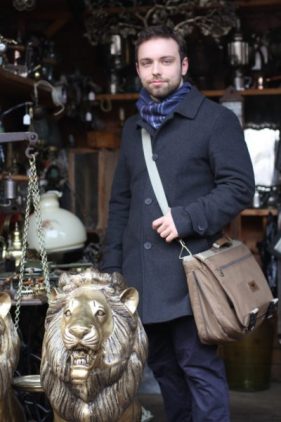 What are the differences between spending a semester or an academic year abroad? Austin McCoy 21, double major in Russian and History, answers some questions on what his year abroad on the Dickinson-in-Moscow program has been like.

Now that I have stayed the year, the first semester feels like it was an orientation period for the second semester. I operate much smoother in day to day social interactions, can navigate around the city like a pro, am used to the academic format here, and have an established list of interesting places to regularly check out. All the rough edges of living in a foreign place are, while not yet smooth, no longer so rough.

Academically, I feel like I had more agency in selecting my classes in the spring semester. I chose classes that I felt would strengthen my weak areas in Russian. The difference between using the language every day for four months during the fall, or nine months across both the spring and fall is a big one. Practical use in the environment has played a big role in shaping my language ability here.

Culturally, so much more opened up for me after the first semester ended. While we had plenty of excursions planned during the first semester, I remember, due to the various challenges of transitioning to a new environment, all I wanted to do with my free time was sleep. After the first semester ended, and I handed in my final assignment, I had about a month of free time before next semester’s classes started. At that point, I made going to cultural activities my full-time job, and it was easily one of the best months of my life. I woke up every day excited about what I could find, and this curiosity naturally led me to discovering some amazing places that I would not have found otherwise and are totally unique to Moscow. The films, concerts, galleries, museums, and various exhibitions in Moscow are so unlike anything I had ever experienced in the United States’ major cities. It was a perfect blend of cultural education and novelty. This even continues now, as I am able to plan my own excursions due to the fact that I am the only student here, allowing for much more flexibility.

Socially, my relationships with friends I met here deepened naturally, as I had more time to spend with them. I am fortunate enough to have met one very good friend who has showed me countless interesting things I could have never have been able to find otherwise. In the past few months, I feel like I have gotten to know a few of the guys at my Jiu-Jitsu gym better as well, as I continue to train. None of this would have been possible if I had only stayed one semester.

I am genuinely struggling to find any challenges in my second semester that were not present in my first. It seems like everything that was difficult before is now less so.

It is impossible to say, there have been so many great things. One highlight is definitely the Mayakovsky exhibit organized by the Tretyakov gallery. The gallery bought a small house on Smolensky Boulevard, which they gutted and transformed into a replica of Vladimir Mayakovsky’s apartment. It started with a very dimly lit first floor that you needed to explore with a red LED flashlight, discovering secret rooms filled with artwork that realized some of his more abstract ideas. From there moved on to a replica photo studio, living area, and finally theater room, where we watched a film on the dramatic reenactment of Mayakovsky’s life. The soviet style of the apartment mixed with abstract decorations inspired by Mayakovsky’s works made it the most immersive exhibition I have ever attended. I went twice.

I am most looking forward to competing and earning my blue belt in Brazilian Jiu-Jitsu here. This is a goal that drives me every day. Being able to go back home and brag that I got my blue belt in Moscow would be great too.

If you want to study in Moscow to immerse yourself in a foreign culture, improve your language skills, and have unique experiences it’s the only real option.