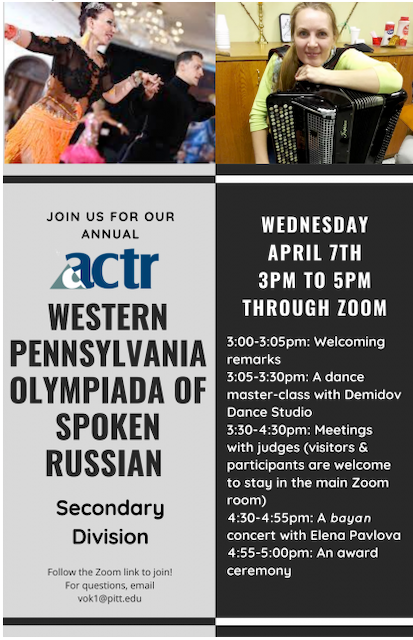 This past week, students from the Russian department competed in the Western Pennsylvania Olympiada of Spoken Russian hosted by the University of Pittsburgh and Carnegie Mellon University. Students Peter Guma and Xander Danielson took home gold medals in their respective divisions. Conducted over Zoom, the competition consisted of three different parts or commissions, all focusing on different aspects of spoken Russian.

The first commission was an interview with judges, in which students spoke to the judges individually, and then conversed as a larger group. “Everything was in conversational Russian” Xander remarked “I [talked] about my interests, hobbies, and things I liked to do.” In preparing for the interview portion, Peter observed that “[the interview questions] were all things I had covered in Russian class, so I felt confident in my abilities.” For the second commission, students presented a digital project, focused on a particular region. Xander’s project focused on his time in Tajikistan and the spring holiday of Navruz and Peter focused on the history of Kaliningrad—a Russian province located between Poland and Lithuania, along the Baltic Coast. “The main challenge I faced along the way was modifying the Kaliningrad presentation I made in class to suit an academic audience,” Peter reflected. Lastly, students were asked to recite and analyze a poem, for which Peter chose Sergei Mikhalkov’s “Kittens” and Xander recited and analyzed Konstantin Simonov’s “Wait for Me.” Students recorded their poem recitations through Flipgrid and then sent them in for judging, after a full evening of competitions.

However, between all of the different competitions, there was also time to meet with other students. “The experience of the competition was more relaxed than I had anticipated” said Peter, “it was a great opportunity to meet Russian students from other colleges.” Both students were awarded a special jury prize for their performance. This was the first time that Dickinson students have participated in the Olympiada of Spoken Russian.