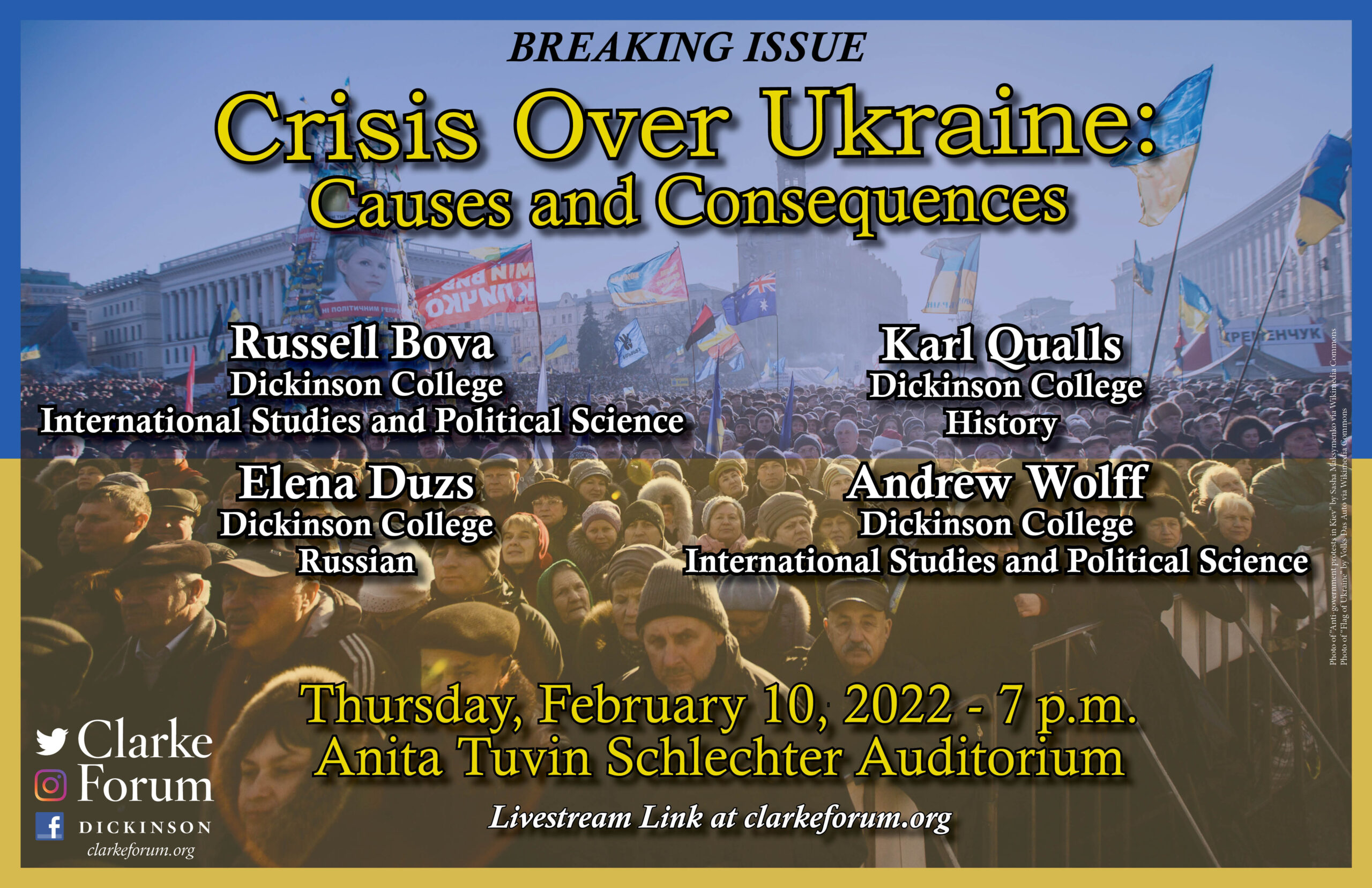 On Thursday, February 10th, our very own Professor Elena Duzs served as one of four panelists in the Clarke Forum “Crisis Over Ukraine: Causes and Consequences.” Seated next to her were Professors Russell Bova and Andrew Wolff, both from the International Studies and Political Science departments, as well as Professor Karl Qualls of the History department. The purpose of this Clarke Forum was to discuss the increasing tensions between Russia, Ukraine, and the West as Russia has amassed over 100,000 troops on its border with Ukraine. Each panelist argued in favor of a different interpretation of this conflict and debated the question of what comes next.

Before introducing the panelists, Xenia Makosky ’24 opened the Clarke Forum with a brief overview of the history of the Russo-Ukrainian conflict. Some of her key points included that Ukraine was historically a region of high agricultural and economic value for the Soviet Union, that Russian President Vladimir Putin has expressed the belief that Ukrainians and Russians are one people, and that American President Joe Biden has threatened severe sanctions against Russia in the event of an invasion. Sharing this information made the Clarke Forum more accessible to audience members without prior knowledge of the conflict.

Afterwards, the four panelists outlined their arguments. Professor Qualls was quick to distinguish between the decisions of the Russian government and the will of the Russian people, later exploring the common origins of modern Ukraine and Russia in the state of Kievan Rus’ while emphasizing their distinct cultures and systems of government. Professor Bova examined a controversial draft agreement that Russia had recently proposed to the US, emphasizing Russia’s desire to reimagine the Post-Cold War security structure by rolling back NATO deployments in Eastern Europe. Professor Wolff also focused on this proposed agreement, though he spoke more critically regarding Russian demands and justified what he viewed as a firm reaction on part of the US and its allies. Lastly, Professor Duzs shared her own views as a scholar who has spent many years reading about the situation in Ukraine; she compared how media outlets in the US, Ukraine, and Russia view the prospect of war.

The Clarke Forum concluded with a Q&A session where students asked panelists questions ranging from how a diplomatic resolution might look to whether Ukraine could ever join NATO. The audience then expressed their gratitude to Ms. Makosky for organizing the event and to the panelists for providing their valuable insight.