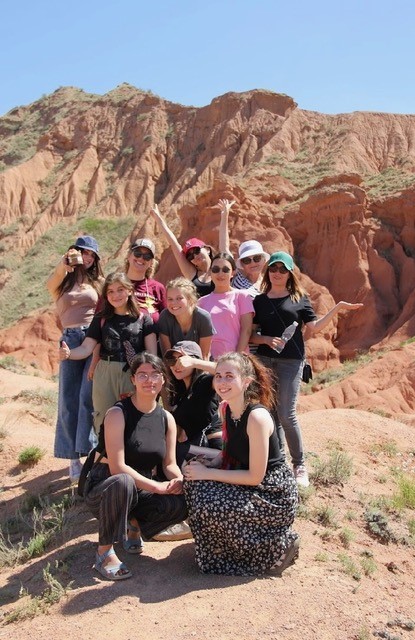 Maddie Garber is a second-year Russian and International Studies double major who was recently awarded a prestigious Critical Language Scholarship to study abroad in Bishkek, Kyrgyzstan for two months this summer.

Describe your living arrangements. What was the city like?

My program stayed in the international dorm of the university we were studying at, American University of Central Asia. Being the capital of Kyrgyzstan, the center of Bishkek is an industrialized city, with organized public transportation, busy bazaars, and numerous historical/cultural museums and galleries. Several of the buildings in the center are still Soviet-esque, as they have not been updated since the fall of the USSR. The city itself is densely populated, but also fairly small geographically, as you could drive out for four or five miles and be on the outskirts of the city.

I had class every day from 9:30-1:50. I took Russian grammar and conversation, Russian and Kyrgyz theater/art classes, and also Kyrgyz language. Our program was held to a language pledge, so we were only allowed to speak Russian when inside of the university and with our professors and peers. We also had excursions one or two times a week to different museums, churches, and attractions in Bishkek.

Describe your most memorable experience?

My most memorable experience was taking a three-day trip around Issyk Kul lake. We stopped along the way at the Burana tour, historical museums, got to swim in the lake, and hike to a waterfall and through “Fairytale Canyon.” Another awesome experience was going horseback riding. A couple of my friends from the group and I drove with a tour guide group outside of Bishkek to the countryside. The views from the tour were incredible, though my horse was a little slow and just wanted to eat the flowers on the side of the path. Afterwards we went to the tour guide’s house, where his wife had made us tea, borsook (sweet, fried dough), and cucumber/tomato salad.

What was the hardest part of your summer abroad?

The hardest part was definitely adjusting to the language pledge and having to using Russian even when I wasn’t confident in my skills. I had only previously taken a year of Russian and many of my classmates had 2 or more years of experience than me. It pushed me to get comfortable with using Russian both conversationally and in class fast.

What is something you want to share with your classmates about the local culture?

Unfortunately, not many people in the West know a lot about Kyrgyzstan other than the fact that it was a part of the Soviet Union. And I was in the same boat before going there this summer. Located in Central Asia, with China, Kazakhstan, Uzbekistan, and Tajikistan as border states, Kyrgyzstan has a beautiful, family orientated culture. The country is incredibly mountainous, and while there are major cities like the capital, Bishkek, Osh, and Karakol, many families also live in the mountains in yurts. A part of Kyrgyz culture that I found really cool was the hat worn by Kyrgyz men called “Kalpaks”. There are specific colors of Kalpaks which indicate the age of the men wearing them, whether that be 20 or 80 years old. These hats are also worn all throughout Central Asia.

What surprised you most?

Something that surprised me was the interest that many people had in Americans studying in Kyrgyzstan. Every taxi ride, if the driver heard my peers and I speaking English they would ask us where we were from, and when we answered that we were from America studying Russian, they were all very curious as to why we chose to study there instead of Russia and our thoughts on Bishkek and whether or not we liked it.

What advice would you give to Russian-language students considering an immersion program?

I would 1000% recommend studying abroad! Being able to study in Kyrgyzstan was such an amazing experience, because not only was I learning Russian language and culture, but I also learned about a country and region of the world that is too often underrepresented or left out of the media, especially Western media. Although studying in Russia is not feasible at the moment because of the war, there are so many countries that students can and should study in!