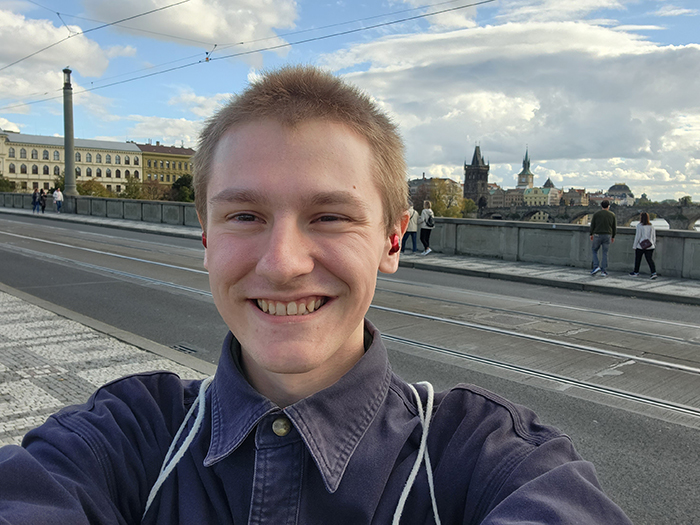 As a student of Russian and Czechoslovakian language and culture, Amos Ek ’24 has learned to become a better communicator in those languages—and also in his native language.

Then We Came to the End by Joshua Ferris.

Best thing about my Dickinson experience so far:

The Gaming Club. Good enemies are hard to find, and I stumbled on a goldmine of opponents to test my skills against and be introverted dorks with.

The second floor of the library, where the comfy chairs face out toward the big windows.

Best thing about my major:

Learning how to communicate more clearly, using fewer words, in Russian, Czech and English. Grammar was kind of a vague set of strange and arbitrary rules before I started studying another language. Studying Russian has given me a much better grasp on both grammar and communication more generally.

The college’s reputation for intensive language programs and pre-decision talks with Russian faculty.

Probably Professor of History Karl Qualls’ course Revolution, War and Daily Life in Modern Russia. The content was interesting, and it supplied unexpectedly relevant context for current events. The standards for work were rigorous, but they made me a much better writer and gave me a solid foundation for studying history.

I studied in the Czech Republic. The cities and historical sites were cool, of course, but I think my favorite parts were seeing the national parks and forests. The rural spaces were completely different from what I’m used to in the States, but still similar enough to remind me of home. The highlight of the experience was my visit to Moravský Kras in Moravia, closely followed by seeing the foliage change colors in Krčský Les, Prague.

Albert Einstein. I wouldn’t actually ask him anything or initiate conversation, but I’d trust him to also keep quiet while we enjoy the meal.