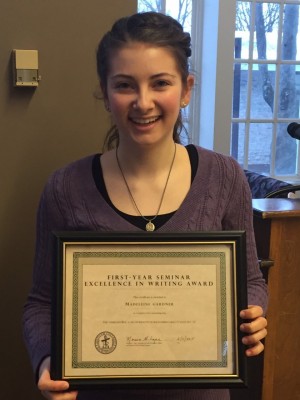 As inspiration to read and write on Baldomero Lillo’s work, Professor DeLutis-Eichenberger led her First Year Seminar through a coalmine in Lackawanna County in August. Visit this site for more information and watch the video below of their adventure.

Madeleine Gardner, a student in the seminar, wrote a compelling essay on Lillo’s “Gate No. 12” and was one of 40 students to submit an essay to the 2014 First Year Seminar Excellence in Writing Awards competition. Her work, “The Nameless Boy: Loss of Identity in Baldomero Lillo’s ‘Gate No. 12.,’” was well-received by the deciding committee, and she was named one of the four winners for 2014. Her essay may be read on the FYS Excellence in Writing Awards Class of 2018 website, where the following summary of her work also appears: “This nuanced literary analysis considers the character of the nameless boy in “Gate No 12,” a story about the exploitation of laborers, like this young coal miner, by the mining companies in Lota, Chile. Through a close reading of the short story, Gardner teases out the implications of the young boy’s namelessness and concomitant depersonalization. She argues that the story dramatizes the boy’s loss of innocence and his enslavement by the corporation that “robs him of his freedom, hope, happiness, and right to a name and a ‘self.’””

On February 11 in the Biblio Café of the Waidner-Spahr Library Madeleine received a monetary award and certificate at the celebration honoring the four winners. She was also offered a seat in the course, “Working with Writers: Theory and Practice.” Students who complete that course typically go on to become Writing Center tutors and Writing Associates.

Congratulations to Madeleine for her fine work! 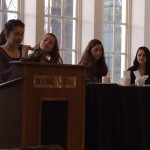 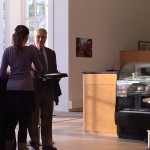 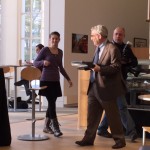 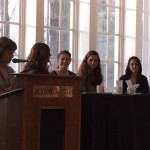 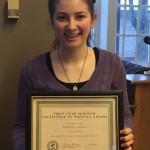 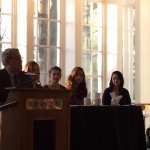