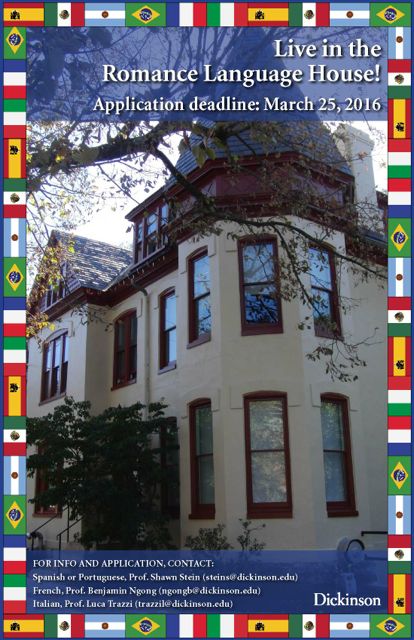 Applications to live in the Casa de lenguas romances for the 2016-2017 academic year are now being accepted.

Located in the Romance Languages House (Reed Hall), the Casa de lenguas romances provides a unique Spanish and Portuguese-speaking living environment for students who wish to practice and improve their language skills.  Parallel to this language immersion, students living in the Casa gain significant insights into the lives, customs and values of Spanish and Portuguese-speaking peoples.
In conjunction with the Spanish and Portuguese Clubs, and assisted by three Assistants from the University of Málaga (Spain) and Mendoza (Argentina) who live in the house, students organize frequent programs centered on topics related to Luso-Hispanic cultures.  In recent years film series, guest lectures, field trips, and a paella dinner have been highlights.

Applications are due by March 25th and can be given to Professor Shawn Stein (office Bosler M10) or emailed to steins@dickinson.edu if off campus.