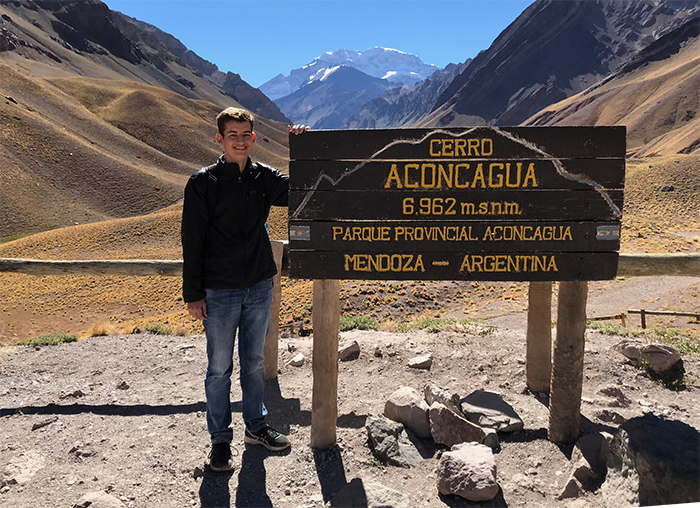 Meet David Swenson ’19, a talented musician, student-researcher and global citizen who trekked the Amazonian rainforest, studied singing as an act of resistance and reported on large-scale global issues through a research internship at the U.S. Army War College’s Peacekeeping and Stability Operations Institute.

International studies and music, with a Spanish minor.

On choosing a major:

I started singing age 9 and performed with the NATS National Honor Choir at the age of 16. Music has always been an integral part of my life. I was a Connecticut finalist in the National Geographic Geography Bee for three years, so international studies and Spanish were obvious choices.

The Sound of Music

I knew I wanted a liberal-arts education, one that focused on and incorporated global studies. As a result, Dickinson appealed to me due to the strength of its study abroad and language programs. In addition, I had read about its impressive music department, an aspect that was crucial in my decision-making process. Lastly, my mother, a Dickinson graduate, spoke highly of the college.

Weiss Center for the Arts.

I studied abroad in the Bologna program in the fall of my junior year and the South America program in the spring of my junior year. One of the highlights of my experience in Italy was the Dickinson excursion to Lake Garda in northern Italy. We hiked up a mountain next to the lake, Monte Baldo, that had spectacular views of the entire region, as the summit is 6,000 feet above the lake’s surface. One of my favorite parts of the South America program was the Dickinson trip to the Amazon rainforest in Ecuador, where we spent four days interacting with the local indigenous tribes and learning about their customs and the ecosystem of the jungle.

I like to look at maps and atlases for hours.

Last semester, I interned at Peacekeeping and Stability Operations Institute at the U.S. Army War College in Carlisle. I assisted a professor at the Strategic Studies Institute in researching his book about strategic realignment in Europe. One of the areas where I improved my skills was my critical thinking, which was required of me when I turned my research into reports on important, large-scale issues.

Last semester, I undertook a research project about the Singing Revolution in Estonia at the end of the Cold War, because it combined my love of music and my interest in international politics and the role music can play. The Singing Revolution was a nonviolent response to Soviet occupation of the Baltic States that lasted for four years and succeeded in securing their independence with almost no bloodshed. Through this project, I learned more about the process of turning research into a final product and also improved my writing ability. Thanks, [Associate] Professor [of Music Amy] Wlodarski!

Being a well-rounded student is invaluable. The collection of experiences I have had at Dickinson has prepared me for life after college in ways I could not have imagined prior to attending Dickinson.

This article was first published via Dickinson Today.